Difference Between an Arraignment and an Indictment 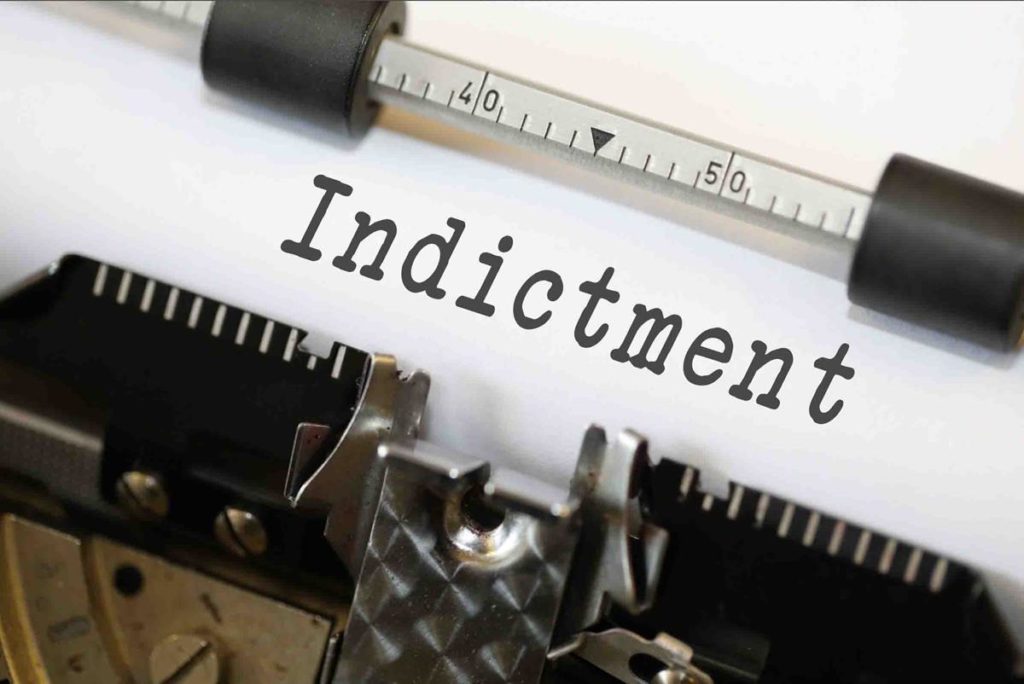 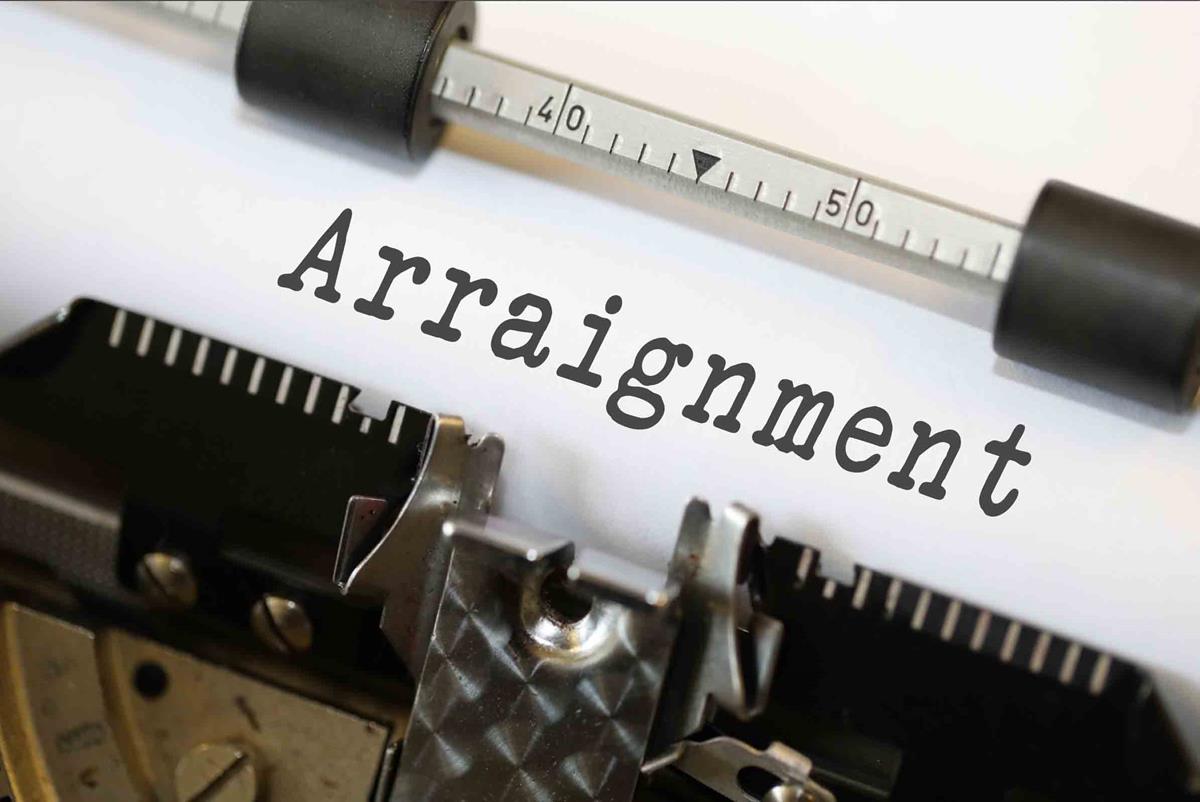 What is an Arraignment?

An arraignment is a formal legal proceeding that takes place in a courtroom before a judge in which individuals who have been detained by law enforcement authorities are presented with the charge or charges against them and have an opportunity to respond to the charges.

Arraignments must take place within a short period of time after an individual is detained by law enforcement.  The amount of time between arrest and arraignment will vary depending upon whether the defendant is in federal or state court and the nature of the crime being charged.

The proceedings in an arraignment will also vary somewhat depending upon the process through which the individual came to be arrested.  There are basically three ways in which a person can be arrested leading to an arraignment:

An arraignment is not a trial.  The prosecutor does not have to prove the charges and the accused does not attempt to refute or object to them.  The prosecutor simply provides an explanation, usually in the form of an indictment, to the judge as to why the individual is being detained by law enforcement and the individual responds with a plea of guilty, not guilty, or no contest (nolo contendere).

Arraignments rarely end a legal case unless the judge deems the prosecutor’s presentation of charges against the accused to be so insufficient in meeting basic legal requirements that the judge chooses to dismiss the charges.  This occurs very infrequently.

Another issue typically addressed at an arraignment is the question of bail.  Since arraignments follow formal charges being filed against an accused individual, in most cases, law enforcement will conclude that this individual either poses a danger to others or might flee the jurisdiction of the court in order to avoid punishment for the criminal actions for which they have been accused.  Lawyers representing the prosecutor and defendant each have the opportunity to offer their positions on the issue of bail and the judge issues a ruling.

Finally, judges will set a trial schedule or at least set a date for the next hearing, although this again will vary based on jurisdiction, the nature of the crime, and particular circumstances of the parties involved.

An arraignment has the following characteristics: 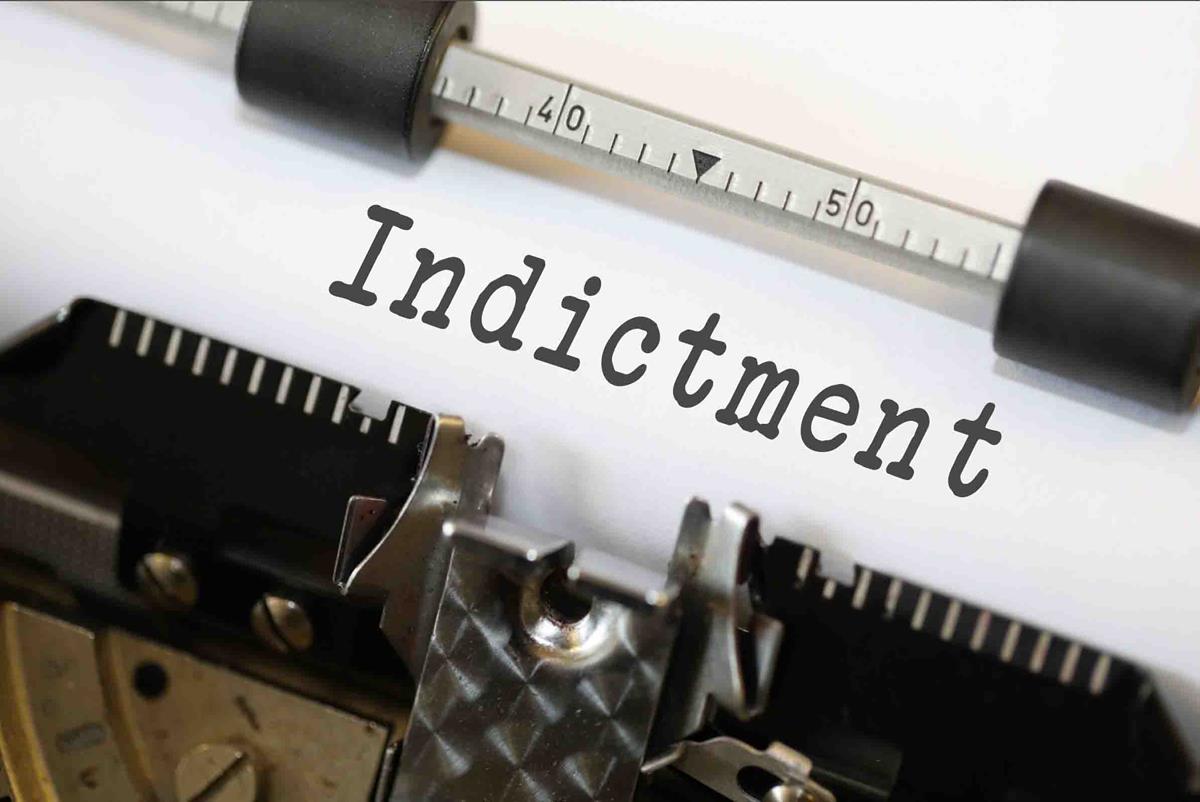 What is an Indictment?

An indictment is a formal criminal complaint issued by a legal authority that charges a person with having committed a criminal action. In federal courts, indictments must be issued by grand juries, which is a group of citizens that reviews the evidence accumulated by federal prosecutors and decides whether there is sufficient probable cause to charge the individual in question with a crime.  In state courts, the process varies.  In most states, prosecutors can issue indictments without approval of a grand jury but different states and counties have different rules on procedures and in many cases, the process will depend upon the crime being charged.

Once an indictment has been issued, law enforcement officials are legally allowed to take the individual into custody if they have not already done so.  Individuals are not legally entitled to an attorney prior to being indicted unless they have been previously detained and/ or interrogated by the police.  Individuals always have the right to have an attorney present when in custody of law enforcement control only have a legal right to be provided legal representation if they cannot afford it.

Indictments can be issued before or after a person has been arrested.  Sometimes a person can be arrested while being suspected of committing a crime and are then indicted after the arrest and subsequent investigation.  In other cases, an indictment can be issued based on an investigation which results in the arrest of the individual in question.

Similarity Between an Arraignment and an Indictment

Both an arraignment and an indictment are based upon the 6th Amendment to the Constitution, one of the original Bill of Rights.

Differences Between an Arraignment and an Indictment

An arraignment typically results in a trial date being set and the accused either being released subject to bail conditions or being remanded to custody if bail is not allowed.  Most defendants are given the opportunity to post bail and be free until trial, except for very serious felonies like murder. 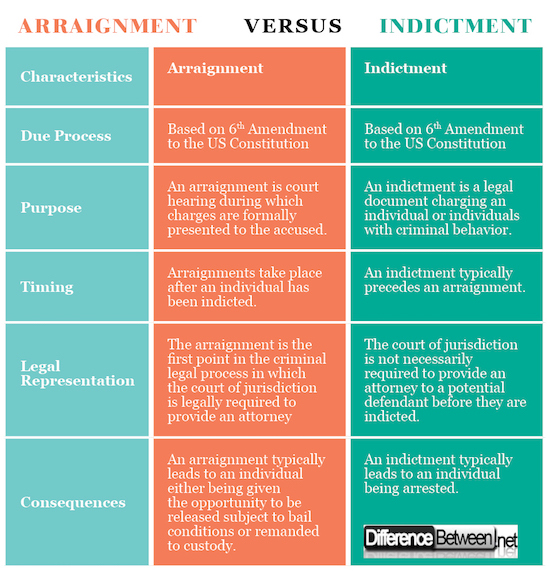 Summary of Arraignment versus Indictment