Difference Between Bronchitis and Bronchiolitis 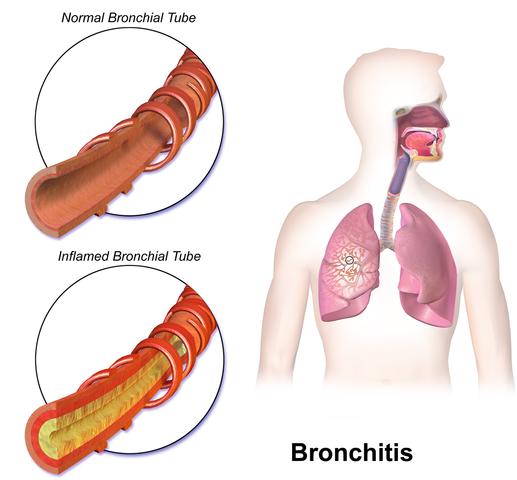 The symptoms include a mainly nonproductive cough, sometimes production of sputum, chest pain and tightness with some degree of difficulty with breathing. Low pitched rattling wheezing sounds can be heard which indicate congestion. Symptoms usually last more than 5 days and can take as long as two to three weeks to completely disappear.

Diagnosis and causes of Bronchitis:

Bronchitis can be diagnosed based on a physical exam and after a chest x-ray has ruled out other conditions. Bronchitis is caused by a virus most of the time (greater than 95% of cases). The viruses that most often cause bronchitis, are rhinovirus and the influenza type A or type B virus. The respiratory syncytial virus can also cause bronchitis as can coronavirus or parainfluenza virus. Chronic conditions such as COPD, smoking, and cystic fibrosis can cause the chronic form of bronchitis.

Cigarette smoking is a risk factor for chronic bronchitis, as is having COPD or cystic fibrosis. Having an upper respiratory tract infection is a risk factor for developing acute bronchitis. Treatment usually involves relieving the symptoms by taking anti-inflammatory medications or painkillers. Beta2- antagonists such as albuterol can be given, which the patient inhales. The beta2-antagonists help a great deal with the wheezing and tightness of the chest. Antibiotics are usually not recommended since infections are mainly viral. 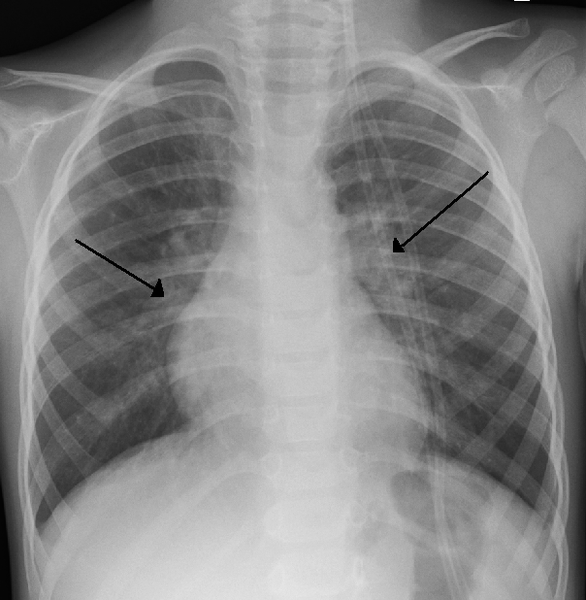 Bronchiolitis is a condition in which the lower respiratory tract is infected and inflamed because of an acute infection from a virus. This illness occurs in infants who are less than 2 years old.

Infants present with symptoms such as a wheezing and hacking type of a cough and fast rate of breathing, as well as difficulty in breathing. Oxygen levels may be low leading to cyanosis (bluish-tinge) in severe cases. Infants may have vomiting leading to dehydration and they may also have an ear infection at the same time.

Diagnosis of the condition is made by physical exam, pulse oximetry (which measures oxygen levels), and chest x-rays. In severe cases, chest X-rays may show changes in the lungs such a hyperinflation. A test for the RSV antigen can be helpful. Bronchiolitis is caused by viruses including parainfluenza virus type 3, respiratory syncytial virus (RSV), and rhinovirus.

Infants who are born prematurely have a higher risk of bronchiolitis. Studies have shown that babies born to mothers who smoke are at increased risk. Other risk factors include being male and living in crowded conditions, and exposure to RSV. Since the condition is caused by a virus the treatment is supportive care and related to the symptoms. Treatment may include giving fluids and oxygen therapy. In very severe cases of bronchiolitis, infants may need to be hospitalized.

Difference between Bronchitis and Bronchiolitis?

Bronchitis can affect people of all ages from infants to the elderly. Bronchiolitis only affects infants who are younger than two years of age.

Bronchitis can be treated by the use of anti-inflammatory and pain medications and beta2-antagonists (such as albuterol), that are inhaled. Bronchiolitis is treated with fluids and oxygen therapy.

Summary of  Bronchitis Vs. Bronchiolitis

Outside his professional life, Sagar loves to connect with people from different cultures and origin. You can say he is curious by nature. He believes everyone is a learning experience and it brings a certain excitement, kind of a curiosity to keep going. It may feel silly at first, but it loosens you up after a while and makes it easier for you to start conversations with total strangers – that’s what he said."
Latest posts by Sagar Khillar (see all)
Share Tweet Pin Mail
Categories: Disease, Health, Science
Tags: Bronchiolitis, Bronchitis
previous post Difference Between JUnit and TestNG
next post Differences Between  Piano and Casio