Difference Between Donkey and Mule 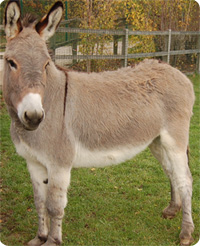 Though one cannot find much difference between a Donkey and Mule, they have anatomical and physiological differences. People often find it hard to differentiate between the two — Donkey and Mule ‘“ as they are almost similar in their looks and ways.

Donkey is a domesticated hoofed mammal, which is related to the horse. But a Donkey is smaller than a horse with long ears, short hair on the tail, short mane and a dark stripe along the back. A Mule is a hybrid animal from crossing a jack (male Donkey) and a mare (female horse).

When comparing the two in regard to the usage, Mules perform better than the Donkeys. A Donkey could show impatience under the pressure of heavy weight, but a Mule is only calm even if the load is heavy for it to carry. A Mule withstands any load pressure whereas a Donkey will not. A Mule has more stamina than a Donkey. This Characteristic of the Mule is attributed to its hybrid origin.

A Mule also has the capability to jump up a few feet from standing position where as a Donkey cannot perform such an act. It is said that Mules are more intelligent than Donkeys.

Though one can come across certain similarities in the physical appearance between a Donkey and a Mule, there are vast differences between the two. Mules have the 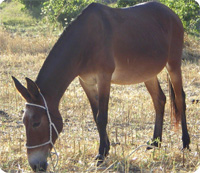 physical structure that of a Horse and a Donkey. Mules have ears smaller than the Donkeys but they are longer and also have almost the same shape of a Horse. A Mule looks like a Donkey with its short thick head, thin limbs, and short mane but it appears different from the Donkey in height, shape of neck, coat and teeth. The Mules are taller than the Donkeys.

While the tail of a Mule is like that of a horse, the donkey has a coarse tail that resembles a cow’s tail. One can also differentiate a donkey from the mule from the sound it produces. The Mule has a distinctive sound that of the Donkey. It has a sound similar to a Donkey’s as well as that of a Horse.

Even though there is a great difference between a donkey and a mule, one can find it hard to differentiate between the two.