Difference between Distance and Displacement 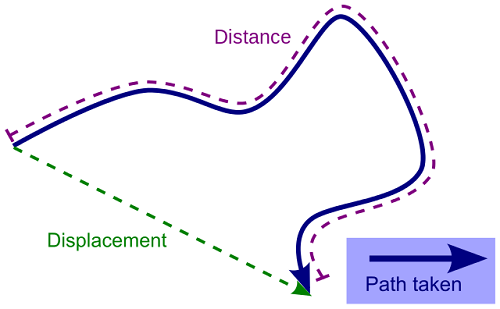 Distance is defined as a scalar quantity, that is, it ignores direction and is only concerned with size or magnitude. It is the interval between points, and describes how much ground is actually covered between two or more points. Total distance would be calculated by adding all the intervals together.

Unlike vector values, distance is never indicated using an arrow since only the size is counted, direction is not of concern.

Distance is a physical quantity that can be measured, and it has specific units, either SI units (the metric system) or English units.

In science we use the metric system, with the meter being the standard unit of length. The meter is defined as the distance that light travels in 1/299,792,458 of a second in a vacuum.

Distance is speed multiplied by time. Since distance is related to both speed and time, if we know two of these values we can obtain the third.

Distance can only be positive, and is an absolute value. Distance travelled can also sometimes be greater than the value for displacement.

The distance can also be measured along a winding non-straight line. It does not necessarily have to be a linear measurement.

Total distance is not the shortest path but the accumulated intervals, it does not matter where one starts or ends. Total distance covered would be the same regardless of how many times the direction changes, so one could move south, north, east or west. It would make no difference as you simply sum up the path to derive total distance travelled.

Displacement is defined as the change in the position of an object taking into account both its starting and ending point. Movement is relative to a reference point, here relative to the starting point.

Displacement is a vector quantity that has both magnitude and direction.

In Physics, displacement is indicated using an arrow (vector). The arrow is drawn from the point at which an object starts from and ends where the object ends.

Displacement can have both positive and negative values and can even be zero.

The SI unit for displacement is also the meter but unlike distance, it is always measured along a straight line.

Since displacement takes change of direction into account, it can cancel out distance travelled. For instance if a person walks 10m west and then turns and walks back 10m to the east, displacement is 0. Walking in the exact same distance in the opposite direction cancels out the distance walked, hence no displacement.

An object could move in a circuitous fashion, but the displacement would be the straight line shortest distance from start to finish.

Velocity is average speed and is thus based on change in position over change in time. It is also a vector quantity, thus it is calculated as the displacement divided by change in time.

What is the difference between distance and displacement?