Difference Between Amid and Amidst 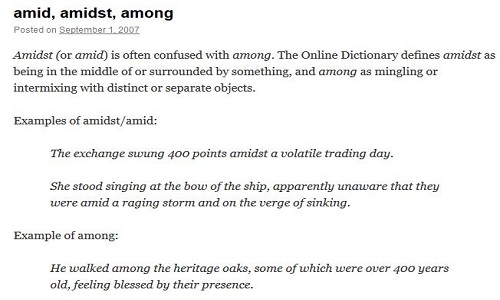 What is the difference between “amid” and “amidst”? The words are very similar and are used seemingly interchangeably by English speakers. While some English speakers seem to prefer one version of the word over the other, some use both.

Both “amid” and “amidst” have exactly the same meanings. They are both prepositions that mean “in or into the middle of something, as in surrounded by it.” These words can be used to show that something is going on all around. For example: We saw a rainbow amid the cloudy sky. Both words can also mean during something. For example: Amidst the loud music, her singing could almost be heard. Finally, “amid” or “amidst” can have the meaning of “being accompanied by something.” For example: The president of the company resigned amid rumors of financial failure. Related to these words is “midst”; it is a shortened form of the old English “amid.” In modern English, the noun “midst” means in the middle part of something or among something. Many times, “midst” can be used as a synonym for either “amid” or “amidst.” For example: In the midst of the loud music, I could hear her singing. However, “midst” has taken on more of the meaning of being directly in the middle or surrounded, whereas “amid” or “amidst” have a more general meaning of area.

Often “amid” and “amidst” are confused with “among” or “amongst.” While these words are very similar in meaning and both have the same ending, there is a subtle difference to be noted. The difference is that “among” or “amongst” has the meaning of being intermixed with distinct or separate objects. Both words are also used for plurals of countable nouns. For example: Summer vacation brings delight among schoolchildren.

Although many English speakers view “amidst” as being old-fashioned or formal-sounding, “amid” is actually an older form than “amidst.” The Old English word “amiddan,” which evolved from “on middan,” and means “in the middle,” became “amid.” The “st” ending of “amidst” is a product of Middle English adding an ending of a few extra letters called an “excrescent suffix.” As Middle English developed into Modern English, many words that had taken up this suffix, like “among”/”amongst” and “while”/“whilst” dropped their extraneous endings and returned to their original forms, although the alternative forms with the “st” endings remained acceptable and still do, especially in British English.