Difference between necrosis and gangrene 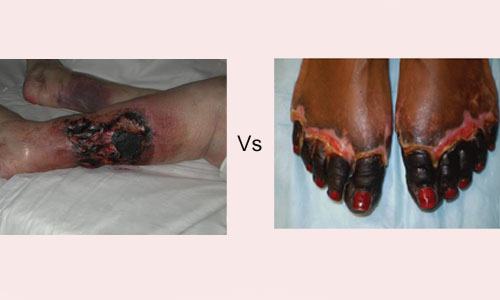 Necrosis is a type of cell injury where premature death of cell occurs. Gangrene is a life threatening condition which arises when a considerable mass of living healthy tissue dies. Gangrene is one of the clinical manifestations of necrosis. Necrosis pertains to cellular level, whereas gangrene involves the tissues.

Necrosis is a result of injury to cell due to external or internal factors. External factors include trauma, thermal injuries or excessively high or low temperatures causing cell death. Internal causes include injury to nerve causing lack of nutrition to cells, injury to blood vessels resulting in reduced blood supply to the cells, certain bacterial enzymes etc. Gangrene occurs due to reduction in blood supply below critical levels, to a particular tissue or due to infection.

Cells which die due to necrosis are characterised by loss of cell membrane integrity, swelling of the cell, shrinkage of the cell hub called nucleus and finally the nucleus dissolving in the surrounding cytoplasm.

Gangrene is caused by insufficient blood supply. In ischemic gangrene, cholesterol plaques producing a narrowing of the arterial lumen cause considerable reduction of blood supply. The atheromatous plaques can form thrombi or emboli reducing the blood flow, further causing tissue death. In infective gangrene, infection starts with contamination of a wound post trauma or after a surgery by the clostridium bacteria. This causes release of bacterial enzymes which in turn cause tissue necrosis. This necrosis, which spreads in underlying fat and muscle, along with clogged up blood vessels creates a low oxygen environment which facilitates further bacterial growth. The resultant tissue swelling further compromises the blood supply. Glucose from the cells is fermented causing gas formation.

1-Coagulative necrosis-this occurs as a result of low oxygen supply to cell e.g. cell ischemia. Cell architecture is maintained with deposition of gel like substances within the cells. This gel is nothing but denatured protein albumin. Organs commonly affected are kidney and the adrenal glands.

2- Liquefactive necrosis.
This is characterised by digestion of cells resulting in formation of viscous liquid. The inflammation caused by the bacteria or fungi result in necrosis causing a liquid mass which is creamy yellow in appearance due to the presence of dead fighter cells, termed as pus. Brain suffers from this type of necrosis as it is rich in fats and enzymes.

3-Caseous necrosis.
This is most frequently caused by TB bacteria. The necrotic tissue appears white and friable resembling clumped cheese.

4-Fat necrosis.
This involves death of fatty tissue due to the action of enzymes like lipases on fat cells. Organs commonly involved are the pancreas, causing acute pancreatitis.

5-Fibrinoid necrosis.
This is an immunologically mediated damage caused by deposition of immune complexes.

1-Dry gangrene.
This occurs due to arterial blockage in legs generally and especially n the elderly; hence, also called as senile gangrene.

3-Gas gangrene
Usually caused by clostridium, these bacteria produce gas and spread into the nearby healthy tissues rapidly. This should be treated as a medical emergency.

Necrosis is the premature, un-programmed death of a natural living healthy cell, due to external or internal injury. This pertains to the cellular level. Gangrene is the death of a mass of cells or tissues due to reduction in blood supply. Gangrene is the end result of necrosis. Diabetes and smoking increase the risk of gangrene by causing narrowing of lumen of blood vessels.