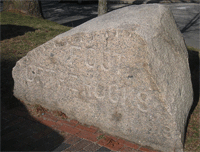 The main difference between Igneous, Sedimentary and Metamorphic rocks, is the way that they are formed, and their various textures.

Igneous rocks are formed when magma (or molten rocks) cool down, and become solid. High temperatures inside the crust of the Earth cause rocks to melt, and this substance is known as magma. Magma is the molten material that erupts during a volcano. This substance cools down slowly, and causes mineralization to take place. Gradually, the size of the minerals increase until they are large enough to be visible to the naked eye. Igneous rocks are mostly formed beneath the Earth’s surface.

The texture of Igneous rocks can be referred to as Phaneritic, Aphaneritic, Glassy (or vitreous), Pyroclastic or Pegmatitic. Examples of Igneous Rocks include granite, basalt and diorite.

Sedimentary rocks are usually formed by sedimentation of the Earth’s material, and this normally occurs inside water bodies. The Earth’s material is constantly exposed to erosion and weathering, and the resulting accumulated loose particles eventually settle, and form Sedimentary rocks. Therefore, one can say, that these types of rocks are formed slowly from the sediments, dust and dirt of other rocks. Erosion takes place due to wind and water. After thousands of years, the eroded pieces of sand and rock settle, and become compacted to form a rock of their own.

Sedimentary rocks range from small clay-size rocks to huge boulder-size rocks. The textures of Sedimentary rocks are mainly dependent on the parameters of the clast, or the fragments of the original rock. These parameters can be of various types, such as surface texture, round, spherical or in the form of grain. The most common type of Sedimentary rock is the Conglomerate, which is caused by the accumulation of small pebbles and cobbles. Other types include shale, sandstone and limestone, which is formed from clastic rocks and the deposition of fossils and minerals.

Metamorphic rocks are the result of the transformation of other rocks. Rocks that are subjected to intense heat and pressure change their original shape and form, and become Metamorphic rocks. This change in shape is referred to as metamorphism. These rocks are commonly formed by the partial melting of minerals, and re-crystallization. Gneiss is a commonly found Metamorphic rock, and it is formed by high pressure, and the partial melting of the minerals contained in the original rock.
Metamorphic rocks have textures like slaty, schistose, gneissose, granoblastic or hornfelsic. Examples of these types of rocks include slate, gneiss, marble, and quartzite, which occurs when re-crystallization changes the shape and form of an original rock formation.