The Difference Between ‘Before’ and ‘Beforehand’. 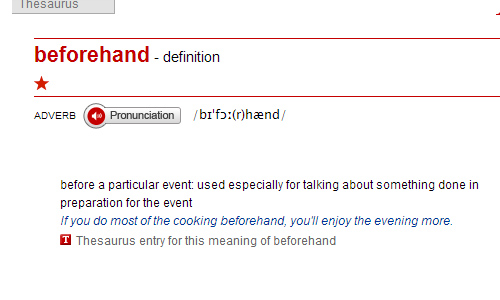 One thing you can understand while comparing a peach and a nectarine is that although the two are almost 100% identical, they are supposedly and genetically not the same thing. They both belong to the family of fruit, they are both peachy orange in color, they are both soft and they both have giant seeds in the middle. But one is fuzzy, the peach, while the other is smooth, the nectarine. They both have the same amount of juiciness dependent on the time of season they are harvested, they both have lots of vitamins ‘c’ and both are almost indistinguishable from each other.

The above example of the peach and the nectarine is a good example to parallel the similarities and distinguishability between the words ‘before’ and ‘beforehand’. To look at them one would think they are synonyms. One differs as a preposition, adverb and conjunction while the other is identifiable only as an adverb. Can you guess which one? Another distinguishing characteristic and yet the primary reason of their differences as words is in their place in time. One is defined as the time before an event, the other is defined as during the time before an event. The similarities are so vague and disproportionate, but the differences are so exact and precise. Examine and discuss the similarities and differences. Studying both of their definitions in the examples and outlines below will give you an intermediate understanding with which to discuss and examine the two variables.

Before: Preposition, Conjunction, and Adverb.

Definition 1: The period of time that precedes a particular event, date or time.
Example 1: He had to leave before his appointment time was due.
Example 2: Before she went to the store, she put her jacket on.
Example 3: Three years before her graduation, she was only practicing to be a full time nurse.
Synonyms: Preliminary to, in preparation for, preparatory to, earlier than, previous to, prior to.
Antonyms: After

Definition 2: In the front of.
Example1: The president of the corporation stood before his people.
Example 2: Before the exit ramp on highway 403, there is a bent side rail.
Example 3: She went before the court only to be judged as innocent.
Synonyms: In preparation sight of, in the presence of, in front of.
Antonyms: Behind, away from.

Definition 3: In the preference to; with a higher priority than.
Example 1: A lady who had placed all duty before all else.
Example 2: Death before dishonour.
Example 3: Gold is has a higher place value than silver, and goes before it on a scale of comparison.
Synonyms: In preference to, rather than, sooner than.
Antonyms: Later than, rather not, unprefered

As you can see, there are a few different ways to use the word before. It differs as a conjunction, preposition and an adverb. These three differences give us much flexibility in the English language. How many times can you think of that you have used the word before in all or any of its different contexts?

Definition 1: In advance of; Prior to an action or event.

Example 1: To go horseback riding, we are going to have to get the saddle beforehand.
Example 2: Before you prepare the salad, check the readiness of the soup beforehand.
Example 3: It’s obvious that in order to fly, you must buy the tickets beforehand.
Synonyms: In advance of, In readiness, Ahead of time.
Antonyms: Afterward

See, the difference is the duration of time. Before is merely an outline of time in question prior to an event, action, date or time. Beforehand is the description of the duration of time outlined in question. To the unfamiliar mind the difference can seem awkward and almost undetectable. Nonetheless the difference is there and it is unquestionable that you familiarize yourself with the distinction. To fail to do so will result in the miscommunication of information, otherwise called ‘misinformation.’

The two above examples don’t seem too hazardous, nonetheless they are apt with confusion that is needless. It is better to arm yourself with proper English and grammar. The words before and beforehand don’t really qualify for new age slang, so the definitions of them matter precisely.

Understanding, and demonstrating yourself well in a situation utilizing your linguistic skill can make you look mature, well-bred and intelligent. These are qualities that most certainly are amicable for most people. Enjoy your study within the English culture. There is much to welcome, attract and sustain you. Happy studying.

jennifer
Latest posts by jennifer (see all)
Share Tweet Pin Mail SMS
Categories: Grammar, Language, Words
Tags: Before and Beforehand, ESL
previous post The Difference Between 'Before' and 'Ago'.
next post Difference Between Gossip and Slander.