The Difference Between Hitler and Mussolini – Europe’s Dark Totalitarian Legacy 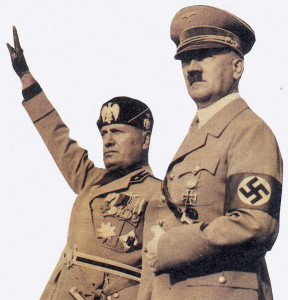 Hitler vs Mussolini
By Jay Stooksberry

When discussing totalitarian movements in modern history, the conversation will always include Adolf Hitler and Benito Mussolini. Hitler’s Nazi Germany and Mussolini’s Fascist Italy represented two-thirds of the Axis Powers during World War II. Both of these individuals projected a great deal of professional respect for one another, and their collaboration made for arguably one of the most violent imbalances in international power that our history has ever recorded.

Both of these individuals trace the beginnings stages of their political careers during World War I. Mussolini and Hitler were both soldiers during the conflict. Ironically, Mussolini was a political journalist and socialist activist prior to the war. Hitler volunteered for the Bavarian army as an Austrian national. During the war, both men developed a very combative view of socialism and communism. Mussolini blamed the socialists for emphasizing class distinctions over nationalistic unity during a time when cohesion was needed for the war effort; Hitler believed that Marxist saboteurs destroyed Germany’s war effort on the home front. Their anti-communism belligerence would play out in their totalitarian policies later.

Although both of these ruthless leaders attained a high degree of power, they demonstrated varying levels of success in their initial efforts to revolt. Mussolini had time to create and disseminate his ideas on fascism and amass quite the following prior to his March on Rome in 1922. In late October 1922, 30,000 Fascist “Brown Shirts” forcibly removed (with the aid of King Victor Emmanuel III) Italy’s Prime Minister from power. Hitler borrowed from this event one year later. Known as the “Beer Hall Putsch,” Hitler and about 2,000 of his supporters attempted to seize power in Munich. However, police intervened which resulted in the death of several of his co-conspirators and Hitler’s imprisonment for treason. Hitler used his time in prison to write his notorious manifesto, “Mein Kampf.” It wasn’t until nearly a decade later – after years of political manipulation and legislative machinations – that Hitler officially resided over Germany.

Hitler and Mussolini developed policy around their fascist principles in a very similar fashion. Dissent was treated with violent repression by an overwhelming strong police state in both Italy and Germany. Regime friendly propaganda was widely distributed amongst and consumed by the public. Large scale public works and infrastructure projects propelled both Italy and Germany out of the Great Depression, and laid the foundation for the burgeoning militarization of both countries. The creation of compulsory, nationalist youth indoctrination programs were both landmarks of these totalitarian leaders. Both individuals carried a sense of megalomania too, best demonstrated by their expansionist foreign policies. Mussolini’s Italy invaded Ethiopia and supported Franco during the Spanish Civil War. Hitler’s Third Reich took on the shape of a cancerous tumor on Europe, slowly absorbing mainland Europe through violent occupation.

Despite these similarities, Hitler and Mussolini weren’t always on the same page. Mussolini wasn’t as fixated on ethnic or religious identity for the creation of the Italian state. Mussolini didn’t embrace Hitler’s pursuits for a “pure race” of his citizenry. Although several anti-Semitic laws were put into place during Mussolini’s regime, many didn’t occur until the late 1930s as more a “tip of the hat” toward the ever-increasing regime of Hitler. Although Mussolini’s regime is easily characterized by its violent nature, his reign will never hold a candle to the large scale mechanization of death that Hitler manifested during the Holocaust. In fact, Mussolini allowed thousands of persecuted Jews to seek refuge in Italy during Hitler’s reign.

Another key difference between the two leaders could be observed in their fall from power. After all opposition had been violently squashed, Hitler enjoyed a broad base of support by the German people. Mussolini’s popular appeal waxed and waned over the course of his 21 year reign. In fact, Mussolini was ousted from power in 1943 by his peers through a vote of no confidence. Two years later, Mussolini was murdered alongside his mistress; then their bodies were displayed publicly and desecrated by onlookers and detractors. Only a few days later, with his regime in disrepair following a military surge by the Allied Forces, Hitler committed suicide (also alongside his mistress) in a bunker. Their bodies were carefully carried out of the bunker, and then burned as Soviet forces closed in on Hitler’s headquarters.

Hitler and Mussolini were kindred spirits in the creation, propagation, and decline of dictatorial rule in modern Europe. Their violent rise to power was met with violent ends. Though their similarities were more profound than their differences, it’s hard to argue against the lasting impact both of these historical figures made on how we view the centralization of political power.