Difference Between Grits And Polenta 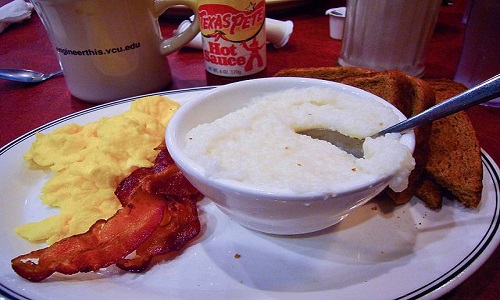 Grits and polenta are made from dried kernels of corn that are ground into different textures. The coarser particles of the corn become grits, and the granules make the polenta. Polenta and grits can be replaced for each other as they have many common elements, though polenta is found to be more refined, than grits. The grits have Native American origin, and is like the thick porridges prepared from thick maize, same as polenta. Both of them are eatable and nutritious. Some people think there is only geographical difference, and that the Italian is polenta, whereas, the Southern is grits. Others hold the view that polenta comes from yellow corn and grits from white corn. Whatever it is, grits in the South are traditionally made from dent corn, while the polenta of Italy, is prepared from flint corn. Corn based dishes are deeply rooted in Native American folklore, and no problem whether we boil, steam, bake or roast, the end result will be the same; delicious and nutritious food; the food of the gods who created the earth!

Grits is the name of a ground-corn food of the people of the Southern United States. The word “grits” is both singular and plural, and is originated from the Old English “grytt”, meaning coarse meal. Modern grits are alkali-treated corn called hominy. Instant grits and quick grits available in the supermarkets are actually processed hominy, meant for speed cooking. The colour of the grits depends upon the tint of the corn, and is either yellow or white.

In the South Carolina, the raw ground corn is called “grist”, and when it is cooked, people call it “hominy”. Nevertheless, the term grits and hominy were used interchangeably for corn based grits, during the colonial times. In due course, hominy became whole, but skinned, kernels that could be ground coarsely to make grits. The New Orleans people call these whole kernels as big hominy, and the ground kernels, as little hominy. In the scholarly booklet “Key Ingredients: South Carolina by Food”, the writer Gale McKinley states: “The Cherokee wife might boil or roast fresh corn. She would grind dried corn into meal for frying, or boil it with hardwood ashes to make hominy. Hominy could then be eaten as is or ground into grits.”

Whole kernel grits are cooked by adding five or six parts boiling water seasoned with adequate salt to one part grits and boiling it for 20 to 45 minutes. The grits expand on boiling and needs occasional stirring to avoid lumps and sticking. They are done when the water is fully absorbed. Whole grain grits require extended boiling than quick grits to make it soft. Most grits are served with salt, pepper, sugar and butter. They are also eaten with grated cheese, sausage, bacon, or red-eye gravy. A cup of cooked grits has 182 calories and 1 gram of fat.   Adding other ingredients like butter, milk and sugar will increase the fat content and calories significantly. Sprinkling a calorie-free sugar substitute and a little cinnamon onto it will make it nutritious. Stone-ground grits need more cooking time, yet they are more nutritious.

Polenta is a Central European dish, prepared by boiling yellow coarse cornmeal with water or milk to form a thick porridge. It is then baked, fried or grilled for consuming. Due to cultural differences in cooking, Italy claimed polenta as its favourite cornmeal porridge. They cook it using water or stock, and served with anything that comes along; like fish, meat, tomato sauce or cheese. The word “polenta” is derived from the Latin term pollen, which literally means “peeled barley,” or “fine flour,” It also means hulled and crushed grain. During the Roman Empire, polenta was the staple food of the Legions. Polenta, for them, was pulmentum, and they ate it either as porridge or as a hard cake. Before the introduction of corn (maize) from the New World, polenta was prepared from faro, chestnut flour, millet, spelt and chickpeas.

Polenta is creamy due to the gelatinization of starch contained in the grain. But it will lose the homogeneous properties if hard grains, like flint corn, are used in its preparation. In earlier times, Polenta was served as a peasant dish in North America and Europe. Apart from using polenta as a gruel or porridge, cooked polenta can be shaped into balls, patties and sticks, and then fried in oil, baked or grilled, till it gets a golden brown colour. The Italians gave the fried polenta, the names “Crostini DI Polenta” and “Polenta Fritta”. This sort of polenta became popular in southern Brazil after the immigration of the Italians to the regions.