Difference Between Centre of Gravity and Centroid

The words centre and gravity are derived from the Latin (or Greek) words “centrum” and “gravitatio”. The centre (centroid) represents the centre of mass that is in the cross-section of the diagonals of the body, and gravity – the weight, the attractive force between particles in the universe under which the celestial bodies move.

What is Centre of Gravity? 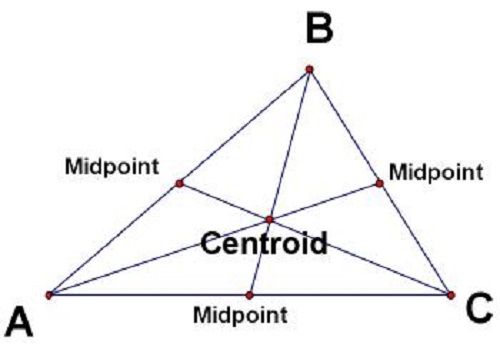 The geometric centre in referred to as centroid. Simply stated, the centroid corresponds with the centre of gravity in case when the body is homogeneous (with constant density). In physics, centroid of a body is defined as the focus point of the vectors’ collection of the gravitational acceleration of all the material points of the same object. If the body is homogeneous this point is located in the intersection of the gravitational lines, and in right geometric bodies it is determined geometrically. Archimedes was the first to describe the process by which an objects’ centroid can be found. He proposed cutting a cardboard with the objects’ shape and piercing several holes in it. Then nail it on the wall on one of the holes and let it hang freely. Hang plumb on the same nail. Draw with a pencil the direction determined by the direction of the end of the plumb. This direction is called the centre of gravity of the object. Hang the body on the other holes and repeat the procedure.

Difference Between Centre of Gravity and Centroid

1. Definition of Gravity and Centroid

2. Calculation of Gravity and Centroid

Calculating centre of gravity is not a simple procedure because the mass (and weight) may not be uniformly distributed throughout the object. Centre of gravity can be calculated from cg * W = S x dw where x is the distance from a reference line, dw is an increment of weight, and W is the total weight of the object. Centroid can be found with methods such as the plumb line method discussed above.

Summary of Gravity and Centroid