Difference Between Chiral and Achiral

Chiral is a term that is used to describe an object or item that is not completely and identically superimposable with a mirror object of itself. Chirality is a feature that is often used in chemistry to describe the configuration of atoms of molecular structures.

Any object that is chiral then is not symmetrical since symmetry occurs when objects do have identical mirror images along a plane. Such objects that are asymmetrical but have the same composition in chemistry are known as stereoisomers. There are different types of stereoisomers that occur in chemistry, which can be very significant in terms of the reactivity of a substance. Although chiral objects will not have reflective symmetry they may still have rotational symmetry, which means that they look the same when rotated 360 degrees.

Everyday chiral objects are, for instance, scissors or golf clubs, where you can choose left-handed or right-handed. In chemistry, chirality can be used to describe certain molecular configurations. A tetrahedral carbon that is bonded to different atoms is most often chiral with non-identical mirror images possible if the carbon is asymmetrically bonded to other atoms. These mirror images in chemistry are referred to as enantiomers and they also have the property of being either right-handed or left-handed in a sense, but in chemistry, this handedness is designated as R or S.

Chirality is an important aspect that chemical engineers must understand, and they must comprehend the significance of stereoisomerism and enantiomers on chemical function. If a drug is designed that is not of the correct form, in terms of chirality, this can have drastic consequences for patients, and may even lead to further illness or death. Researchers investigating amyloid proteins that are implicated in causing brain disease have discovered chirality in the structure of the amyloids, which may be useful in developing treatments.

Achiral is a term used to describe an object that is completely and identically superimposable with a mirror object of itself. The nature of chirality is that generally, only simple molecules such as hydrocarbons are likely to be achiral.

Objects and molecules that are achiral have a reflective center of symmetry, and they thus appear identical even when viewed in a mirror. Such objects that are achiral also have what is called rotational symmetry.

Achiral objects do not show stereoisomerism and thus there is no concern when chemical engineers design such molecular structures since the molecules can only bond in one particular way.

Difference between Chiral and Achiral? 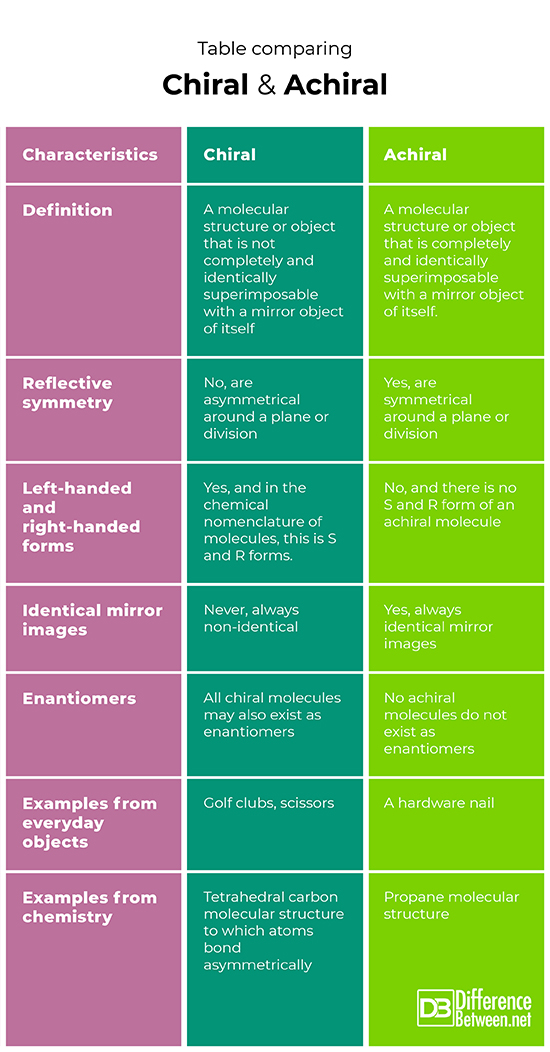 Summary of Chiral Vs. Achiral