Difference Between Colloid and Suspension

Dispersion systems consist of two or more chemical compounds or simple substances, called system components, distributed among each other. They form:

Depending on the size of the particles of the disperse phase there are:

Depending on how the particles of the dispersed phase refer to the medium, the colloid systems are:

Depending on the nature of the medium, the colloids are:

The optical properties of the colloids are manifested as coloring, opalescence, and Tindal effect. They are due to differences in the absorption and dispersion of light from the colloidal particles.

Colloidal particles are larger and heavier than the ions and most of the molecules, so their diffusion and osmotic pressure are low.

A characteristic kinetic property of colloids is the Brownian movement. The colloid systems are less stable than that of the ordinary solutions. Under a constant electric current, all the colloid particles move to the corresponding oppositely charged electrode. This phenomenon is called electrophoresis. 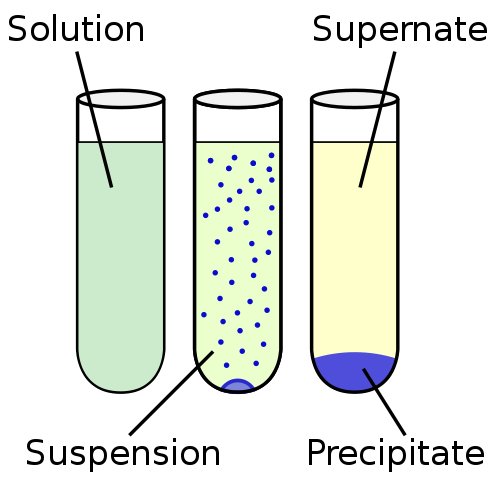 Suspension is a heterogeneous liquid, containing insoluble solid particles that are large enough to settle but for some time are present throughout the volume of the liquid matrix. The particles are bigger than 100 nm.

The classification of the suspensions is based on the dispersed phase and the dispersion medium.

The solid phase of the suspension is dispersed in the liquid phase by a mechanical stirring process by means of an inert or weakly active agent used as a suspending agent. Unlike colloids, the suspensions settle down over time. An example of a rapidly precipitating suspension is sand and water.

One of the most important features of the suspensions is their sedimentation instability. It is expressed in the inevitable settling of suspended particles under the influence of gravity. Particles can settle by themselves, without sticking together. In this case there is an aggregative stability of the suspension.

If the settling particles stick together under the influence of molecular forces of cohesion and form aggregates, then there is an aggregative instability of suspensions. Thus, sedimentationally unstable suspensions can be aggregatively stable or unstable.

Sometimes in coagulating suspensions, large flakes are formed that are poorly wetted by the dispersion medium and float to the surface. This phenomenon is called flocculation.

Sedimentation instability of suspensions in practice leads to a gradual disruption of the uniform composition before the complete deposition of the insoluble phase.

There are also suspensions, having the ability to remain in a suspended state for a long time. They are called stable suspensions.

The suspensions are obtained by various dispersion and condensation methods.

Difference Between Colloid and Suspension

Colloid:  Dispersion system with a liquid and solid component, with particles size between 1 and 100 nm is called colloid.

Suspension: Dispersion system with a liquid and solid component, with particles size above 100 nm is called suspension.

Suspension: The particle size is above 100 nm.

Colloid: The particles in the colloid cannot be seen with a naked eye.

Suspension: The particles in the suspension can be seen with a naked eye.

Colloid: The colloids are relatively homogenous.

Suspension: The suspensions are heterogeneous.

Colloid: The colloid particles can pass through filter paper. 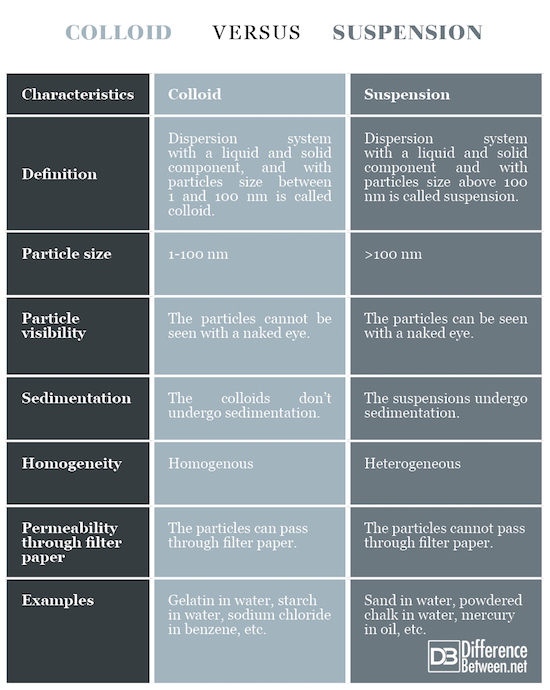 Summary of Colloid and Suspension