Difference Between Hindu And Buddhist meditation 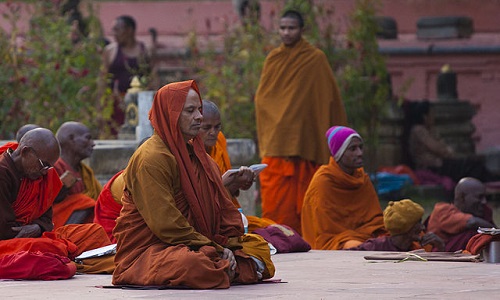 Meditation is a process by which an individual controls his/her mind and induces a mode of consciousness either to achieve some benefits or for the mind to simply acknowledge is contents without being identified with the content, or just as an end in itself (Slagter, 2008). Within this broad definition, meditation is practices in different techniques with different objectives of the practitioners. It is practiced by some as a way to relax mind, some do it to generate positive thoughts of mind, and yet some take it as a method to enhance mind-power. Meditation is also believed to have the power to heal certain diseases of the practitioner, and in the spiritual context some practice it to regulate mind towards some divine power.

Some of the earliest references to meditation are found in Rig Veda around 5000 BCE in India. In between 6th and 5th century BCE meditation was developed in Buddhism and Jainism followed by Islamic Sufi sect (Lating 2002). References of meditation are also found in Torah of Judaism (Verman, 1997).  In Christianity meditation is used to mean a form of prayer where the believers concentrate upon the revelations of God.  Today meditation is practiced all over the world without any reference to religious context, but the techniques remain as they were thousands of years earlier. In the present context the focus will be made on the differences between Hindu meditation and Buddhist meditation.

In Hinduism (originally Sanatana Dharma), meditation has a place of significance. The basic objective of meditation is to attain oneness of the practitioner’s spirit (atman with) omnipresent and non-dual almighty (Paramatma or Brahman). This state of one’s self is called Moksha in Hinduism and Nirvana in Buddhism. But at the same time Hindu monks and later Buddhist monks also are said to have achieved miraculous power by practicing meditation. The Hindu scriptures prescribe certain postures to attain the state where the mind is in meditation. These postures are called yoga. Clear references of yoga and meditation are found in ancient Indian scriptures like Vedas, Upanishads, and Mahabharata that includes Gita. The Brihadaranyaka Upanishad defines meditation as “having become calm and concentrated, one perceives the self (atman) within oneself” (Flood, 1996). In the Hindu method of meditation there are a set of rules to be followed in the process of yoga to successfully practice meditation. These are ethical discipline (Yamas), rules (niyamas), physical postures (asanas), breath control (pranayam), one-pointed concentration of mind (dharana), meditation (dhyana), and finally salvation (samadhi). Very few can reach the stage of dhyana without proper knowledge and training from Guru, and fewer are said to have reached the final stage. Gautama Buddha (originally Hindu prince), and Sri Ramakrishna, are said to have been successful in attaining the final stage of salvation (samadhi).

Yoga, the basic construct of meditation is said to have a number of beneficial effects so long as physical and mental wellbeing is concerned. In Patanjali, the ancient Indian scripture on medical science references are found of Yoga’s disease healing capacities. These biological benefits of yoga are being increasingly recognized by the global medical fraternity.

Buddhist concept of meditation is closely associated with the religion and philosophy of Buddhism. It is presumption of historians that the basic idea of meditation passed to Buddhism from Hinduism, as the founder of Buddhism himself was a Hindu, before attaining Moksha. The Buddhist ideology and practices of meditation are preserved in ancient Buddhist texts. In Buddhism meditation is considered as part of the path towards nirvana. Gautama Buddha has said to have detected two important mental qualities that arise from practicing meditation. These are; serenity or tranquility that composes and concentrates the mind and insight which enables the practitioner to explore the five aspects that constitute the sentient being, namely matter, sensation, perception, mental formation, and consciousness.

The techniques of meditation as described in Hindu texts are very difficult and it takes years to master on even some of the lower level meditation techniques in the hierarchy of techniques and significance. There are references in ancient Indian and Chinese texts of Hindu monks achieving mysterious powers like flying, breaking objects by looking at them and likes. Buddhist meditation techniques, on the other hand, are much simpler, though ancient Buddhist monks are said to have had used meditation to improve fighting techniques.

The range of purposes and techniques of meditation in Hinduism is much wider as compared to that in Hinduism. All the three aspects of humanity namely physical, mental, and spiritual are addressed by the concept of meditation. Whereas in Buddhism meditation is a part of their religious practices.