Difference between German and American Rottweilers 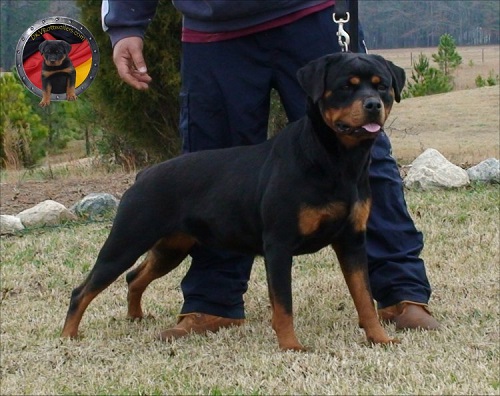 The country of birth is only one of the distinguishing factors between German and American Rottweilers. However, this is a minor difference. Ultimately, what determines between the two is the standards under which they are bred. In other words, the main difference lies in the bloodlines.

For a Rottweiler to be considered German, it must be born in Germany, or have parents who are German-born with ADRK (Allgemeiner Deutscher Rottweiler Klub) registration papers (1).

The ADRK is a German association based in Minden. At present, it is the only association in Germany that takes care of the Rottweiler breed. It is also currently the only organization recognized by VDH e.V., an umbrella organization of German-approved Dog Breeding Clubs as well as other canine organizations. More importantly, ADRK adheres to the FCI or the Fédération Cynologique Internationale standards (2).

According to the FCI, the following are the general characteristics of the Rottweiler breed:

The Rottweiler is a medium to large sized, muscular dog, which is neither heavy nor light, and neither leggy nor weedy. The breed’s built is correctly proportioned, compact, and powerful, which makes the Rottweiler strong and agile.

The length of the body, which is measured from the sternum or breastbone to the ischiatic tuberosity should not go beyond the height at the withers by a maximum of 15%.

Rottweilers are good-natured, even-tempered, obedient, devoted, compliant, eager to work, and fond of children. They behave in a steady, confident, as well as self-assured manner, and reacts to their surroundings with pronounced attentiveness.

The FCI also sets forth definitive descriptions of the physical appearance and condition of a Rottweiler’s specific body parts such as the skull, the nose, muzzle, lips, jaws/teeth, cheeks, eyes, ears, neck, back, loins, croup, chest, belly, tail, forequarters, upper arm, forearm, pasterns, front feet, hindquarters, upper thigh, lower thigh, hocks, and hind feet. Furthermore, the FCI provides detailed descriptions of the gait, skin, coat, size and weight, as well as height at withers of a Rottweiler. Any deviation from these criteria is considered a fault.

The following are just some of the purposes for which ADRK was formed:

To preserve, stabilize, and consolidate the properties of the companion, service, and working dog

To fix the breeding marks

To improve the character and physical capabilities of the Rottweiler

To control the breeding and education with the goal of the Rottweiler as service dog for all public authorities, as guide dog, as well as rescue dog

To guide the members with the breeding and attitude toward Rottweilers

There are plenty of other standards set forth by the association but the main objective of the ADRK is to define and promote the Rottweiler Breed Standard and to enforce these standards through strict breeding protocols. This is what makes German Rottweilers superior to Rottweilers bred in countries that don’t follow the FCI standards.

Before a puppy can be registered as a German-born Rottweiler, his or her parents have to pass the ZTP, (3) a very strict breed suitability test, which involves a comprehensive evaluation of the conformation, health, and temperament. This test ensures that only the best representatives of the Rottweiler breed are allowed to produce puppies.

The dog’s size, head, coat, teeth, eye color, and other physical factors are checked when determining conformation while personality traits such as obedience, attentiveness, and courage are considered when determining temperament. The dog’s age, hip classification, and having at least a basic BH Degree (similar to the CD or Companion Dog qualification of AKC) (4) are also taken into account.

Apart from meeting all the standards mentioned previously, the parents should have certification regarding genetic diseases such as hip and elbow dysplasia. There must also be compatibility between the Rottweiler and the dog it is intended to be bred with. If all these qualifications are not met, the pups will not be registered.

As the name implies, American Rottweilers are born in the US, where the breeding standards are determined by the American Kennel Club (AKC) (5). Because the AKC does not adhere to the standards established ​by the FCI, there are variations in the appearance of American Rottweilers compared to their German counterparts.

Here are some of the guidelines regarding the physical attributes of American Rottweilers according to the AKC (6):

The ideal Rottweiler is medium large in built, powerful, and robust. The dog is to be black with clearly defined rust-colored markings. While bitches are by nature less massive with a smaller frame and lighter bone structure than dogs, they are without weakness in either structure or substance.

Dogs are between 24 inches to 27 inches while bitches are between 22 inches to 25 inches. The length of the body, which is from the prosternum to the rearmost projection of the rump is to some degree longer than the height of the dog at the withers. 9 to 10 is the ideal proportion of the height to length. The depth of the Rottweiler chest is approximately fifty percent of the dog’s height. Bone as well as muscle mass should be adequate to balance the dog’s frame to give it a powerful yet compact appearance.

The AKC also specifies the desired characteristics of the Rottweiler’s head, face, neck, topline, body, forequarters, hindquarters, coat, color, gait, and temperament but they are not as detailed as the FCI standards.

Another important point to consider is that with AKC, all a breeder needs to do to have Rottweilers registered is to call or email the association about the number of pups born and who the parents are. Unfortunately, this means there is no assurance about the quality of the pups’ genetics (7)(8).

Due to breeding that doesn’t follow strict standards, some American Rottweilers have a more elongated and narrow head, which weakens the bite strength that the German Rottweiler breed is known for, the markings, which should be rich and well-defined become faded or muddy, and a leggier and weedier version replaces the massive muscular frame as well as the compact, solid bone structure of the standard German Rottweiler breed.

What is even more unfortunate is that the changes don’t stop with the physical attributes, they also affect the breed’s temperament. German Rottweilers are confident, nurturing, and calm but indiscriminate breeding has led to dogs which are skittish, confused, aggressive, and even fear biters.

Of course, there are breeders in the US that endeavor to uphold the ADRK standards to produce American Rottweilers who resemble their German counterparts in both conformity and temperament.