Character and Trait-Do they Differ ? 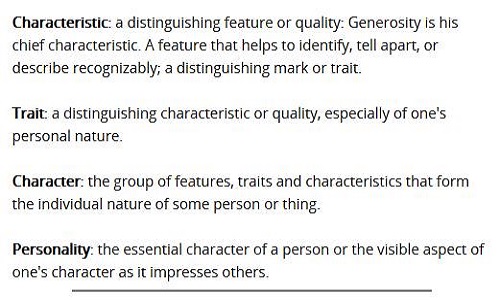 Character and Trait are two words in the English dictionary that is often reciprocated as synonyms. However such conclusion is not true. Character refers to the distinctive qualities that a person exhibits. Such qualities can either be inherited or acquired over a period of time, with interaction between intrinsic and extrinsic environment. Hence character refers to a behaviour exhibited by a person which varies from situation to situation.

On the other hand trait indicates the inherent qualities that are present in an individual from birth. Traits can either signify a behavioural pattern or a disease pattern. For example, certain genetic diseases like sickle cell anaemia are referred to as “trait” while extrovert or introvert feature of an individual is referred to as “character”.

Such development of character depends upon one’s interaction with the socio-economic environment in which an individual grows up or spends time as a part of their profession. Character is something that is learnt by experiential learning. For example, schooling and good parental support helps an individual to generally exhibit good moral character. On the other hand economic poverty and parental constraints deviates the character of an individual child. However, such observations are not true always. Due to the want and need for financial independence, people tend to sway away from moral character as their actions are influenced by others or by a particular situation.

Trait is something that is genetically determined and is present within an individual right from birth and does not change over a period of time. For example, a person with sickle cell trait or trait for colour blindness will always continue to suffer, from sickle cell anaemia and have a difficulty in identifying the hues of colour.

Trait is not changed through association and dissociation, with surrounding environment or societal situations. Different members of a family or a pedigree might have the same trait. For example, a person carrying a dominant gene for color blindness will exhibit color blindness, however if he contains the recessive gene, he will still carry the trait for color blindness but will not exhibit the same.

The major differences between character and traits are tabulated below: