Difference between Polyp and Medusa 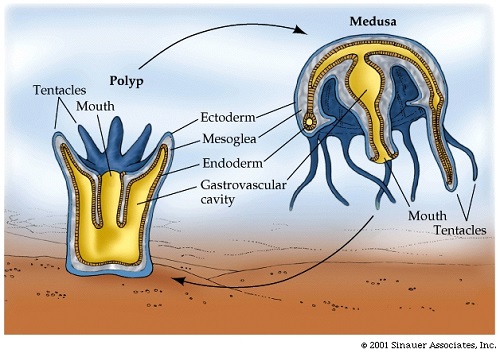 Polyp is a sessile life cycle stage of the species belonging to the Cnidaria phylum.

Adult corals and sea anemones are examples of polyps.

A polyp is formed by a tube with a mouth surrounded with tentacles, referred to as a “head”, and is attached to the bottom with a foot-like disk. Mouth and tentacles face towards the water.

Polyp reproduction can occur either sexually or asexually. In the example of corals, separated sexes where some corals are males and others are females exist, while other coral species are hermaphrodites with an individual being both male and female.

Asexual reproduction occurs by budding through the evagination of a circular are of tissue including the endoderm and ectoderm.

Sexual reproduction occurs by spawning. At a given time following the secretion of pheromones, corals release a big number of sexual cells in the water.

Medusa is a mobile life cycle stage of the species belonging to the Cnidaria phylum.

Species of the Hydrozoa class exist in medusa form or jellyfish.

Morphologically, a medusa is formed by a bell capable of muscular contractions which enables the medusa to swim.

Tentacles with a different morphology from those of polyps, photoreceptors, and gravity-sensing statocytes surround the bell.

Hydrozoa class members additionally possess a manubrium, which is a tube hanging down from the bell with the mouth at its end.

The space extending between the base of the manubrium into the bell consists of the gastric cavity. Medusa reproduce sexually.

Medusa development varies within the classes of the Cnidaria phylum. In Hydrozoa class members, medusa are formed by budding. The evagination of the endoderm and ectoderm is followed by the proliferation of ectodermal epithelial cells at the tip of the bud, forming an internal cavity.

The cavity then opens, tentacles grow, and the tissue attaching the medusa to the parent polyp constricts releasing the newly formed medusa.

In other cnidarian classes such as Cubozoa or Rhizostomae, medusa are produced by the metamorphosis of the polyp.

Difference between polyp and medusa

Polyps have a tubular shape and are fixed at their base. Their mouth is present at the other end of the tube, and is surrounded with tentacles forming the “head”. Mouth and tentacles face the water.

In contrast, medusa have the shape of a contracting muscular bell enabling it to swim. In Hydrozoa species, the mouth is present at the end of a tube hanging down from the bell known as the manubrium. Tentacles, photoreceptors, and gravity-sensing statocytes surround the bell.

The photoreceptors and the statocytes are sense organs present only in medusa and lacking in the polyp.

Polyp reproduction can be asexual by budding through the evagination of a circular are of tissue including the endoderm and ectoderm, or sexual by spawning following the release of pheromones. Polyps exist as separate sexes or hermaphrodites. Budding of polyps can produce either polyps or medusa.

Medusa, however, can only reproduce sexually, giving birth to medusa only.

Polyp are the primitive form of Cnidaria, with medusa being the more evolved form.

Medusa are free swimming, reproduce sexually with cross-fertilization increasing genetic diversity, and present a more complex morphology than the polyp form. While polyp lack the presence of sense organs, medusa have photoreceptors and gravity-sensing statocytes.

Summary of polyp and medusa