Difference between Conductors and Insulators 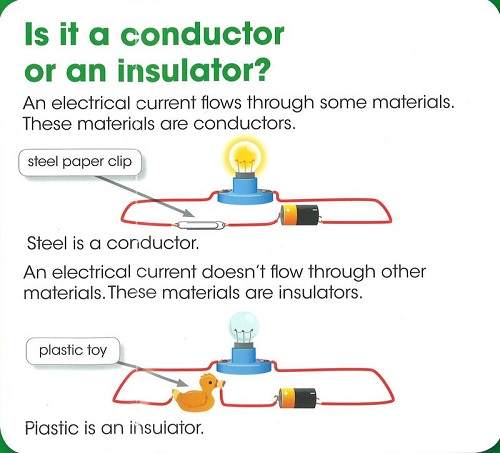 Not every atom is created equal. The atomic structure varies from atom to atom. Some atoms are incapable of holding their outer electrons together. They are called free electrons because they can roam freely from atom to atom. These electrons pass electrical energy from one particle to another thereby transferring energy in the form of electricity. A conductor is a substance which anticipates free flow of electrical charge. On the contrary, an insulator resists electricity, which means it has exactly the opposite effect on the flow of electrons. The electrons bind together tightly within atoms, thereby restricting free flow of electrical charge. Let’s study the difference between the two in detail.

Most metals such as copper, aluminum, iron, gold, and silver are good conductors of electricity as the electrons are free to move from one atom to another. For example, copper is a good conductor because it anticipates the free flow of electrons quite easily. Aluminum, on the other hand, is also a fair conductor but it’s not as good as copper. It is very lightweight so mostly used in power distribution cables. Let’s take an example of a bulb. When you switch on the light, the electrical charge passes through the wire which causes the bulb to emit light. It’s nothing but flow of electrons between atoms.

Metals are the most common conductors of electricity. Other conductors include semiconductors, electrolytes, plasmas, plus non-metallic conductors such as conductive polymers and graphite. Silver is a better conductor than copper but is not practical to use in most cases because of its higher cost. However, it is used for specialized and sensitive equipment such as satellites. Even water mixed with impurities such as salt can be considered as a conductor.

Some common examples of insulators are glass, plastic, ceramics, paper, rubber, etc. The flow of current in electronic circuits is not static and voltage can be quite high at times, which makes it a little vulnerable. Sometimes the voltage is high enough to cause electric current to flow through materials that are not even considered as good conductors of electricity. This can cause electric shock because human body is also a good conductor of electricity. Therefore, electric wires are coated with rubber which acts as an insulator which in turn protects us from the conductor inside. Take any cord for that matter and you can see the insulator and in case you see the conductor, it’s time to replace it.

Difference between Conductors and Insulators

Summary on Conductors vs. Insulators

Outside his professional life, Sagar loves to connect with people from different cultures and origin. You can say he is curious by nature. He believes everyone is a learning experience and it brings a certain excitement, kind of a curiosity to keep going. It may feel silly at first, but it loosens you up after a while and makes it easier for you to start conversations with total strangers – that’s what he said."
Latest posts by Sagar Khillar (see all)
Share Tweet Pin Mail
Categories: Hardware, Industrial, Science, Technology
Tags: atom, Conductors, electrons, energy, Insulators
previous post Difference between iTunes and Apple Music
next post Difference between Apache and Nginx