Difference Between T-Mobile and AT&T

Technological developments are one of the factors that played an important role in the telecommunications industry. The telephone went from a means of two-way connection to a system that facilitates people to communicate with each other throughout the world. The maturation of the telecommunications industry over the years involved all aspects of the industry and the agents who played a part in forming it: the network carriers and the regulators. Telecom providers played an important role in the evolution of the industry. With the rise of equipment vendors like Samsung and Apple, cell phone operators continue to play a crucial role in bringing a new era to telecommunications.

The telecom landscape has changed over the years that impacted the future structure of the industry. Mobile operators are the undisputed leaders and the key players of the telecommunications industry, with T-Mobile and AT&T leading the competition as the dominant mobile phone carriers in the United States. AT&T and T-Mobile are the second and the third largest telecom operators in the United States. We present a head-to-head comparison of the two network carriers to see who the real winner is.

T-Mobile is the third largest wireless network operator in the United States based out of Bellevue, Washington. T-Mobile is a wholly-owned subsidiary of German telecommunications giant Deutsche Telekom, which holds direct or indirect investments in mobile communications companies in Europe and the United States. T-Mobile owns network operators in Germany (T-Mobile Deutschland), the US (T-Mobile USA), Great Britain (T-Mobile UK), Austria (T-Mobile Austria), and the Netherlands (T-Mobile Netherlands). In 2001, T-Mobile USA had a unique network sharing agreement with the American mobile operator Cingular Wireless, which gave T-Mobile access to California and Nevada, which contain two of the top ten markets in the United States – Los Angeles and San Francisco. Deutsche Telekom currently serves as the kit sponsor for FC Bayern Munich.

American Telephone and Telegraph Company, or AT&T, is the second largest telecom company in the United States headquartered in Downtown Dallas, Texas. The history of the company dates back to the Graham Bell’s invention of the telephone in 1876.  In 1885, the National Bell Telephone Company (NBTC) established AT&T to provide the nation’s first long-distance network. In 1899, after buying all the assets of the Bell Company, AT&T has become the parent company of the entire Bell system. Deeming it a monopoly, the US Department of Justice broke AT&T in 1984. With an eye on more exciting industries such as the computer business, AT&T parted ways with its local operating companies. In the 2000s, AT&T expanded its international and domestic wireless streaming technology services. In 2014, the company purchased the Mexican carrier Iusacell and the Mexican wireless business of NII Holdings, and combined the two to form AT&T Mexico.

Difference between T-Mobile and AT&T

– T-Mobile is the third largest wireless network operator in the United States based out of Bellevue, Washington. T-Mobile is a wholly-owned subsidiary of German telecommunications giant Deutsche Telekom. The company now serves over 76 million people. AT&T is the second largest telecom company in the United States headquartered in Downtown Dallas, Texas. For most of the 20th century, American Telephone and Telegraph Company (AT&T) was the largest corporation the world. Throughout its history, the company’s technological innovations served as a standard for the world’s telephone industry.

– Both AT&T and T-Mobile are the leading wireless network providers in the United States. However, T-Mobile boasts the most comprehensive network with a great coverage in the city and the suburbs. But AT&T has an impressive network converge when it comes to rural areas. Network coverage is one of the people’s top considerations for switching between networks, and this is where T-Mobile beats the competition. However, AT&T coverage is extensive and the company is looking to expand its coverage on a large scale.

– Considering the prices of AT&T and T-Mobile plans, it’s pretty clear than AT&T tends to be a bit expensive than T-Mobile, while T-Mobile’s plans are among the most budget-friendly options, which is a huge plus for T-Mobile. Plus, the T-Mobile’s plans are all inclusive of taxes and fees, which give the carrier an edge over AT&T in the category. The T-Mobile Essentials Unlimited plan is basically the cheaper plan of the carrier at $60 per month, but without free Netflix and international data.

– T-Mobile leads the pack in the category, thanks to its flagship ONE plans, which start at $70 per month with the highest data de-prioritization point of 50GB, after which the speeds are reduced. AT&T has also stepped up the game with its impressive Unlimited & More plan, which gives unlimited data on-the-go at a starting price of $70 per month and an additional $40 for an extra line. However, AT&T capped the data limit to 22GB per month, which is a major downside. In addition, AT&T’ plans do not include taxes or additional fees, but offers an autopay discount of $10 a month compared to $5 per month for T-Mobile. 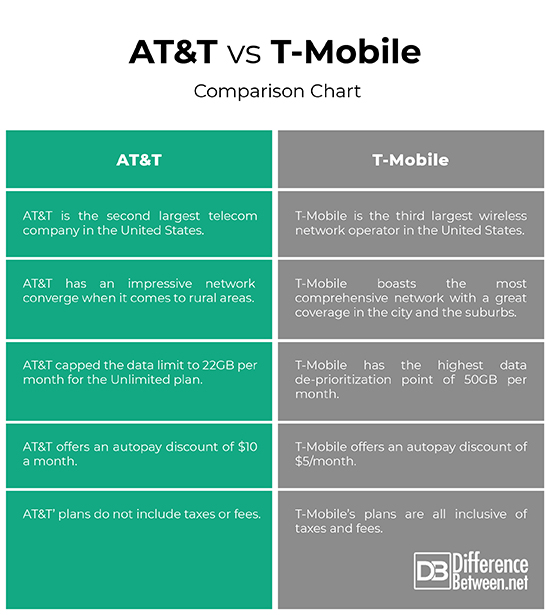 Summary of AT&T vs. T-Mobile

The unlimited offerings of both the network carriers are impressive with some great features and add-ons. While T-Mobile has better deals and performance, AT&T’s unlimited plans are a true lifesaver. But there’s a catch; AT&T’s plans do not include taxes or additional fees, while T-Mobile includes fees and taxes. Additionally, T-Mobile ONE plan offers up to 50GB of unthrottled data each month, which is significantly more than what AT&T has to offer. While cost and features are important points of consideration, there are other factors worth considering such as network coverage, customer service, perks and add-ons, and more.

Outside his professional life, Sagar loves to connect with people from different cultures and origin. You can say he is curious by nature. He believes everyone is a learning experience and it brings a certain excitement, kind of a curiosity to keep going. It may feel silly at first, but it loosens you up after a while and makes it easier for you to start conversations with total strangers – that’s what he said."
Latest posts by Sagar Khillar (see all)
Share Tweet Pin Mail SMS
Categories: Communication, Technology
Tags: AT&T, T-Mobile
previous post Difference Between Adobe Muse and Dreamweaver
next post Difference Between Clockwise and Counter-clockwise