Difference Between Oxford and Cambridge 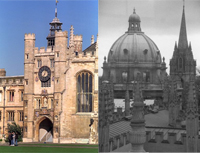 Oxford vs Cambridge
The two most famous and oldest universities in England, The University of Oxford and the University of Cambridge are together known as Oxbridge. Their foundation history dates back to more than 750 years ago. In this time many politicians and scientists have been produced from them. There has been a competition between the two from the start. They are different in many ways. Some of their differences are:

The two cities that contain these two universities are totally different. For example, the city of Oxford is bigger and it has more industries. On the other hand, Cambridge is smaller and less populated.

The area around Cambridge is called Silicon Fen and it accommodates many high tech manufacturers. Oxford is connected to the motor industry. BMW is manufacturing their Mini in Oxford.

The two universities use different terms for various subjects. For instance, their JCR is used to refer to an undergraduate student boy but in Cambridge its full form is ‘Junior Combination Room” while in Oxford it is ‘Junior Common Room’. Both of them have three terms of the academic year but the names are different. At Cambridge they are called Michaelmas, Lent and Easter while in Oxford the names are Michaelmas, Hilary and Trinity. In the most colleges of Cambridge the large grass compounds are called ‘courts’. In Oxford they are referred- to as ‘quadrangles’ or quads .

At Oxford they put more importance on choice of college than Cambridge. Students cannot apply for the entire subjects available at the university in Oxford. A student can only apply for the classes that teach the subject of their interest. But in Cambridge the students can join in any subject offered by the colleges.

They have different interview systems too. Oxford interviews applicants in more than one college and they often ask them to stay longer in the city so they can call them for later interviews. The selection process is quicker and they usually publish the result before Christmas. On the other hand, Cambridge offers the students a second interview if they fail to get in the college of their first choice. The interviews are shorter here. The results of the interviews are generally out at January or at the end of December. Both of the universities start the interview process at mid-December.

The rules and traditions are different in the two universities. Such as, Cambridge is not strict about wearing university uniform but Oxford requires the students to wear the formal academic dress called “Sub Fusc” before they attend all the examinations.

Oxford is more popular in the movies. Often many cinemas feature them. One famous example of this is the Harry Potter movie. This movie was shot in various locations of Oxford. The architecture and design of the city gathers more producers and tourists. Cambridge also has its famous tourist spots and locations that the movie producers tend to choose. The Kings College Chapel is one of the most attractive spot in Cambridge. Punting is less popular in Oxford than Cambridge as Oxford does not have the proximity as Cambridge for the purpose.

These two universities have many other differences based on their tradition and student activities.