Difference Between Noodles and Spaghetti 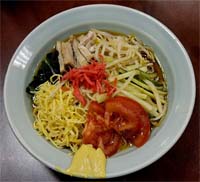 Both Spaghetti and noodles are very popular and favourite dishes of many. Spaghetti is one of the well-liked foods among Americans, although it has Italian origin. Some say that Spaghetti was originated in Chinese and traders may have brought in it to west. But Noodles were definitely originated in China, and recently world oldest noodle was excavated from there.

Although both spaghetti and noodles are long and cylindrical in shape, noodles are thinner than spaghetti. Traditionally noodles are eaten with chopstick, whereas fork is used to eat spaghetti.

The main ingredient of spaghetti is wheat flour, but noodles can contain different types of ingredients such as rice starch, rice flour, potato starch and Canna starch. High quality spaghetti is prepared of durum wheat.

Generally Spaghetti boiled in water with olive oil or salt, and then they are served with sauce and additional toppings such as herbs (most commonly oregano), oil, basil leaves, meat, and vegetables. Pecorino Romano, Parmesan, and Asiago cheeses are most frequently used in spaghetti dishes to enhance the taste.

There are many popular varieties of spaghettis available in market. Spaghettini is a thin type of spaghetti, also known as angel hair spaghetti. It usually takes only 2 minutes to cook, whereas spaghettoni is wide in diameter takes much time to cook.

Shirataki is thin and translucent noodle made of konjac plant. It is a type of Japanese noodle with low in calorie and carbs. It may be useful to people who are looking for low calorie and low carbs diet.

1. Spaghettis – Italian origin, long and cylindrical in shape, thicker than noodles, made of wheat flour and water, and eaten with forks.

2. Noodles- Originated in China, thin, long and cylindrical in shape, made of different ingredients, traditionally eaten with chopsticks.