Difference Between Sumerians and Egyptians 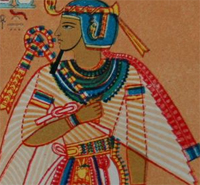 The Sumerians and the Egyptians were both great civilizations that flourished in antiquity around the same time and were among the first nomadic groups to settle in the one place ‘“ the cradle of civilization. While many lay people have at least a perfunctory knowledge of the ancient Egyptians, the Sumerians, perhaps unfairly, are less known to the general population.

The Sumerians were a people who settled on the flood plains of the mighty Tigris and Euphrates Rivers around 4000 B.C in what is today part of Iraq. Ancient Egyptian society had taken shape on the nutrient rich banks of the Nile River.

While both the Sumerians and the Egyptians chose to settle in fertile river plains and developed sophisticated agriculture, religion and political systems, there are also many differences between the two groups and the key features of their ways of life.

Sumerian religion was based around the worship of four life giving deities ‘“ the god of heaven, the goddess of earth, the god of air and the god of water. In the Egyptian pantheon there were around 2000 recognized gods and goddesses. In Egypt the pharaoh was worshipped as a living god, but Sumerian society was not a theocracy.

Another difference between the Sumerians and the Egyptians is the way they approached death and prepared for the afterlife. The Egyptians were reasonably well protected from attack and thus lived lives that embraced the future and they made grand preparations for their passage into the afterlife. In contrast the Sumerians were vulnerable to attack and lived a much more volatile existence. Their funerary rites were uncomplicated for their passage into the afterlife.

The Sumerians were one of the first peoples to develop a system of writing. Their writing system was called cuneiform and was named after the wedge shaped writing implement used. It was etched onto clay tablets, which were then fired in kilns to make the writing last. The Egyptians developed hieroglyphics, which were a very different style of recording information and they also wrote on papyrus made from reeds. Papyrus was cheaper and easier to produce than clay tablets, which resulted in vast record keeping capabilities with the Egyptians. The differences in geography between the two civilizations led to the development of different writing technology.

When comparing the technological advances of the two great civilizations Mesopotamia’s is more impressive. This is probably due to the fact that the surrounding environment of the Sumerians was harsher and more difficult to predict and manage.

Sumerian and Egyptian governments were quite different. Egyptian government tended to be more authoritarian with absolute power residing with the pharaoh; however in Sumer the city-state politics allowed for more input from nobles acting as councils.

Summary:
1.Both were great ancient civilizations
2.The Egyptians had more complex funerary ceremonies and afterlife mythology than the Sumerians
3.Both peoples developed complex, but different writing systems for the purpose of record keeping.
4.The Sumerians had more technological advancements than the Egyptians.
5. Egyptian government was more authoritarian than Sumerian government.