Difference Between Governor and Senator 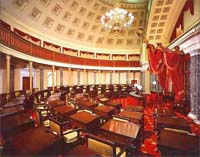 Each state in the union has two senators and they are expected to represent the state at a federal level. Senators vote on different bills that are passed through to the senate by congress. The senate performs a very important function in federal politics as they have the power to pass or veto proposed laws that have been put forward by congress.

The office of governor and senator are both used as stepping stones to the presidency of the United States. Bill Clinton was a former governor and Barack Obama is a former senator.