Differences Between Snow and Snow Showers 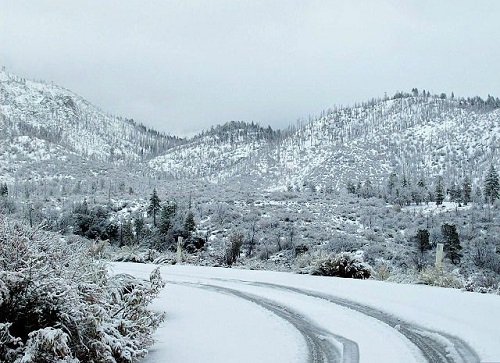 Snow and snow showers are very similar weather phenomena. There are only very subtle differences between the two. In fact, they look the same when the snow is falling. For this reason, they can frequently be confused for one another or mislabeled. The first major difference, though, is that snow refers to the thing itself. It is frozen water vapor that falls in flakes. But a snow shower refers to the weather phenomenon in which snow falls. Despite this difference, the term snowing is still commonly used to describe the weather phenomenon.[i] It’s generally accepted as a descriptor, but there are still other distinctions between when they both would be used appropriately.

The largest difference is that there is a variance in the duration. Many people think that there are differences in the intensity of both snowfall and snow showers, but the variance is actually in the duration. For this reason, it may not be obvious which is occurring until after some time has lapsed. The descriptor word ‘snowing’ would be used for something that is much longer in duration than a snow shower. Snow showers tend to come on suddenly and end quickly. They are of a much shorter duration. Both snow and snow showers can come in varying levels of intensity, from very light to very heavy.[ii] Another key distinction is that snow showers would describe a period in which there is intermittent snowfall, whereas the term snowing would be used when it is a much longer, more predictable fall of snow. These terms are further confused by the fact that there are other descriptive words that might be used to describe a weather event in which it might be snowing. Other examples would be a snow storm which describes a very heavy, or intense, snowfall. A blizzard would be an event where heavy snowfall is coupled with heavy winds, and a snow flurry describes very light, brief periods of snowfall.[iii]

Because there is a big difference in the amount of time in which snowing and a snow shower can occur, there is also a difference in the amount of accumulation of snow. Since snowfall typically describes an event that lasts much longer, it is commonly associated with the accumulation of snow on the ground. This is different from a snow shower that is much shorter and typically does not last long enough for any snow to accumulate. If some does, it is very little, whereas, snowfall can provide several inches of accumulation.[iv]

Snow is essentially a water in its solid form that falls from clouds. It is a granular material, and can come in many sizes and shapes. Snow forms when there is an upward movement of air around a low-pressure system. This is known as an extratropical cyclone. These cyclones can bring very cold and perilous conditions with heavy snow and wind. Snow will then fall on the poleward side of these systems’ warm fronts and within their comma head precipitation patterns (due to their comma-like shape).[v] Snow essentially occurs when there is a temperature difference causing warmth and moisture to transport upward and condense in vertically oriented clouds. This temperature difference is affected by the height of the movement and cloud depth, which are also affected by the water temperature and the large-scale environment. This means that the more the temperature decreases due to a movement along a larger height, the deeper the clouds get and the greater the precipitation rate becomes.[vi] Since snow showers produce little precipitation and are much shorter than when it is snowing, the air movement requires that it be for a much shorter span than would occur with an extended duration of snowfall.

The variance in the duration of both snowfall and snow showers also cause the two to look very different when they are tracked with satellite weather radar systems. A Doppler radar image of a snow shower would be primarily a very light to medium blue to indicate that there is frozen precipitation, though they are sometimes a very dark blue to indicate a very intense snow shower. However, the area of the shower would also be very small or appear as scattered blobs on the screen. This would indicate the short or intermittent nature of the snow shower. Snowfall would be indicated by any varying shade of blue color but would exist as something that is much larger than a shower. Snowfall would also appear to be primarily continuous rather than looking scattered like a shower would.

Thought the technical definitions of snow, snowfall and snow shower indicate that the primary difference is actually only in the duration of the events, there is a common belief that snow refers to the object which exists in a totally frozen state, and snow showers describe the fall of precipitation that is only partially frozen or comprised of some snow and some rain. However, this is actually called sleet. Sleet is a soft, translucent material that contains traces of ice crystals and it occurs only briefly while the snow/water is moving from one phase to another.[vii] To further confuse the two, the event in which sleet falls is frequently called ‘wintry showers’ in the United Kingdom or a ‘wintry mix’ in the United States. Despite these misconceptions, it is important to realize that snow, snowfall and snow showers all refer to events in which snowflakes, as a totally frozen solid, fall to the ground as precipitation. With so many similarities between the terms, it is very easy to see how all of these terms can be confused, but there are a few key differences that are worth remembering.