Difference Between Twister and Tornado 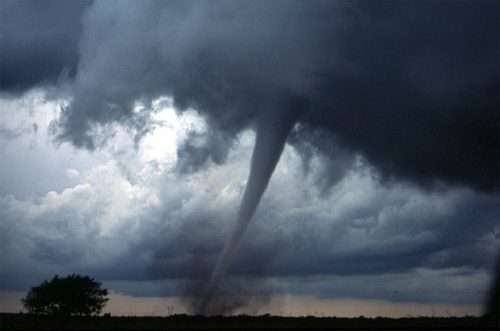 Tornadoes are known to be one of the most destructive of storms, if not the most destructive. These spinning winds of havoc can go well over 200 mph and, at times, can be more than 1 mile wide. Sometimes, we hear the term “twister” as well. It may seem that the twister and the tornado cause the same amount of destruction depending on their strengths. During these times, the question may come to our minds: what is the difference between a tornado and a twister?

Tornadoes and twisters are capable of doing the same amount of damage, and if seen, they pretty much look alike. This is because tornadoes and twisters are the same. The term “twister” is just slang for “tornado” because of how it acts; technically, a tornado is a rapidly twisting vortex that most of the time gains strength as it moves along land.

“Tornado” is generally the term used by meteorologists. So with this being said, there is no need to keep wondering what the difference between a tornado and twister is, since they are two terms describing the same phenomenon. Another question that may come up is: how are they formed?

First and foremost, a tornado is a spinning pillar of air formed when cold air from the sky meets the warm air on land. This causes instability in pressure and makes the warmer air rise. After this happens, a tornado is born within a giant, rotating thunderstorm. If you would notice, before a tornado hits land, rain and hail begin to fall.
Once the tornado hits land, the spinning mass of air begins to speed up as it sucks up any debris in its path. Most tornadoes are easily visible; this is because of the dirt and debris that they pick up. Tornadoes are generally colorless. Some tornadoes occur in water, and since they only pick up water, they are barely visible, especially at night.

Now, how do we predict that a tornado, or twister, will form? The answer is, we cannot predict it. Even some experienced meteorologists and storm chasers have a hard time foreseeing if a tornado will land. The only thing that these courageous men and women can predict is the path a tornado it will take. Once a tornado hits, it is unstoppable, and the worst thing that can happen to is for it to grow more and more as it tears up the landscape. The more debris it takes in, the faster it spins, and the wider it gets.

However, seeing the middle of a huge twister is somewhat fascinating, since a big tornado is powered by a smaller tornado in the middle of the entire spinning wind mass. There are still a lot of mysteries spinning along with these twisters about how they form. Another mystery is how tornadoes stop; so far, scientists have been unsuccessful in their attempts to explain how a tornado dies out. However, as soon as a tornado stops, we know that destruction has stopped as well.

Tornadoes are a baffling force of nature; even though some already know how they are formed, they still hold a lot of mysteries. But as long as tornadoes continue to wreak havoc, it is best to know just what to do in case a twister comes our way.

1.There is no difference between a tornado and a twister.
2.The term “twister” is just slang for “tornado”.
3.Tornadoes form when warm air meets cold air, causing unstable pressures.
4.Tornadoes grow as they pick up more debris.
5.Tornadoes are generally invisible – what makes them visible is the debris and dirt they pick up.
6.Even though scientists know how a tornado is born and how it grows, how it dies is still a mystery.
7.It is nearly impossible to predict when and where a tornado will hit.