Difference Between Episcopal and Methodist 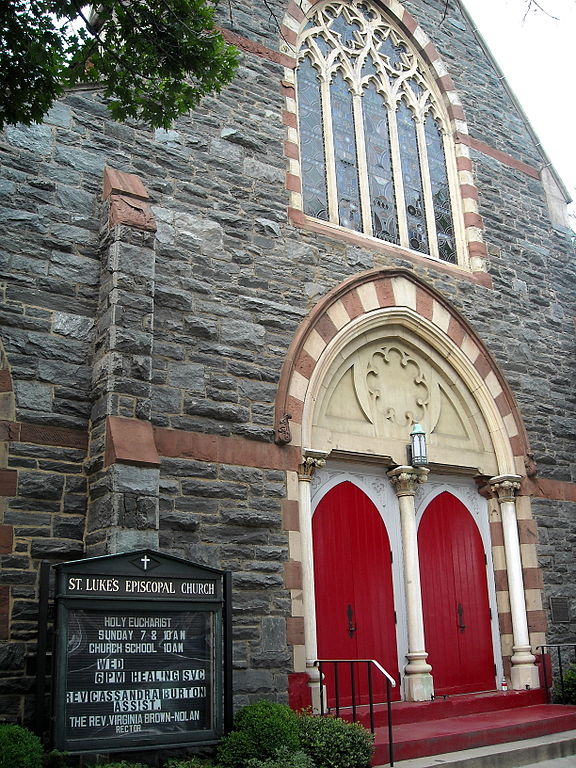 There exists a thin line between these two denomination terms. As a result, most people have never known any difference to have existed between the two. As such, you might hear people referring to an Episcopal a Methodist and vice versa. Perhaps the difference is not huge at all, and it all depends on a deeper understanding of the religious aspects behind the use of the two terms.

From time immemorial, generations have sprouted from one another. As they grow, they find themselves following the church ideas their preceding generations were following. In that case, the differences between Episcopal and Methodist continue disappearing into the horizon. Again, unless one is studying deeper theology aspects, it would be hard to decipher any variance between a Christian who is a Methodist and one who is an Episcopal.

Even with the scarce differences between the two, this post seeks to draw the thin line between them.

Episcopal can be defined as a relationship to a Christian church bishop. It can also be used to refer to one affiliation to or matters that are related to Anglicanism.

What is the Episcopal Church? 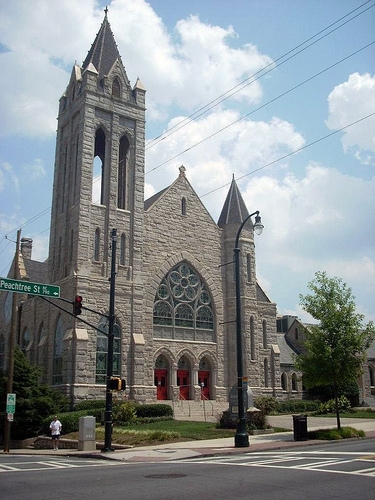 What is the Methodist Church?

The Methodist Church sprouted from within the Church of England. It is a movement that was founded by one John Wesley and sought to reform the Church of England. It, however, broke apart from its parent body forcing it to develop into an autonomous church. It is now under the World Methodist Council. The council hosts churches that follow the Methodist tradition and comprises of over 40.5 million Methodists across 138 countries.

Similarities Between Episcopal and Methodism

Both the Episcopalians and Methodists share creeds, Scriptures, an episcopate, sacraments, and commitments to a Christian life of holiness. Both churches allow their members to receive the Eucharist freely in one another’s communions. They also commit to the common mission, witness, service, and worship.

Difference Between Episcopal and Methodist

There is no easy way of differentiating between religious groupings. After all, we all believe they serve one God even though some scattered bits of their practices are different.

The Episcopal Church inherited the doctrines it operates under from the Church of England. Methodism, on the other hand, is marked by the acceptance of historical Christianity doctrines.

The Episcopal Church continues to follow the Apostle’s and Nicene creeds while the Methodists had dropped the Nicene’s decades ago.

The Methodist church dropped the Anglican Holy Communion during the liturgical movement while the Episcopal has continued to undertake the process in the Anglican way. The Episcopalians also continue holding that the Chicago-Lambeth Quadrilateral is the standard for the full communion while the Methodists hold a Wesley’s liturgy.

Still, on the Holy Communion, the Methodists celebrate the communion with pure, unfermented grape juice. The Episcopal Church, on the other hand, still holds to the use of some type of wine.

Another difference based on the Holy Communion is the near-universal practice carried by United Methodist from decades ago to admit unbaptized congregants to Communion while the Episcopal still follows the Anglican way where baptism and confirmation precede Holy Communion.

Four orders characterize the Episcopal ministry, that is, laity, deacons, priests, and bishops while the Methodist Church has three orders. These are laity, deacons, and elders.

The Episcopal way of worship draws it structure from The Book of Common Prayer. The Eucharist forms the principal act of Sunday worship for the Episcopal Church. The Methodists, on the other hand, use the Book of Worship as their liturgical guide.

The United Methodist Book of Discipline prohibits homosexuality and marriage between persons of the same sex among the congregants. As for the Episcopal Church, same-sex marriages were authorized, and the rites have been performed since 2015. Even though some of the Episcopal dioceses do not allow it, they all remain in communion.

For the Methodist Church, the General Conference is the highest legislative authority while the Episcopal highest legislative authority is the General Convention. The former is made up of clergy and lay delegates who meet after every four years while the latter is made up of two houses, deputies (also referred to as the clergy and laity), and bishops and meet after every three years. 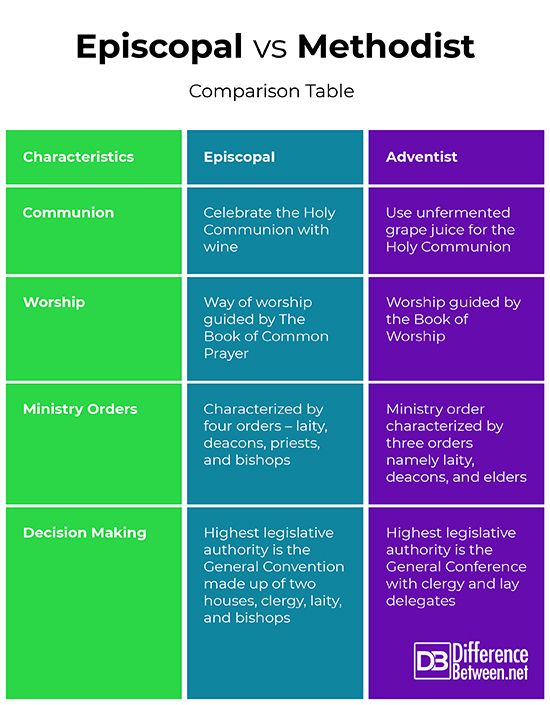 Summary of Episcopal vs Methodist

People who believe in one deity long to belong together. No one would wish to see a formerly stuck together denomination breaking from the service to their deity. As it stands, both the Episcopal and Methodist churches are Catholic. They are also both reformed, and evangelical. However, differences in the way things were being done in the past drew the boundaries and made the two main groups drift away from each other. However, there can never be many differences except for the way that things are done. Both denominations hold God as sacred and channel their worship, praises, and prayers to Him.