What is the difference between English and British?

On the surface, this looks like an innocent question easily understood and answered. However, when one starts to drill down into the details then it really starts to get complicated. Is this an ethnic or nationalistic question? Is it one of ancestry or one of the citizenry? Can a person be one and not the other? Can they look Asian, Middle Eastern or African and still be English or British or both?

England is a country, just like Scotland and Wales and Northern Ireland or Ireland. Then there are the British Islands of Isle of Man, Guernsey, and Jersey. So now, let’s break this down.

Here is a diagram expressing the ideas stated above. It should be clearer now to even the most casual observer. 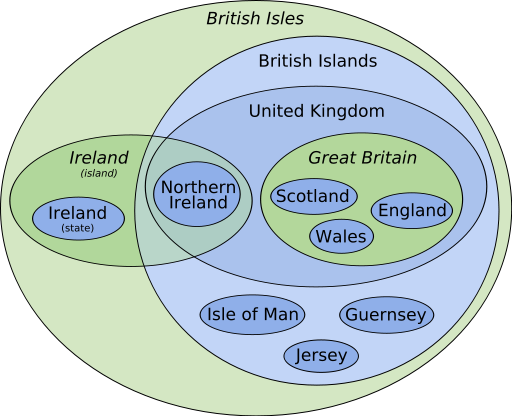 However, that is not the end of the discussion. Because all we have covered now is what the geographical locations of being English or British are. Now the question comes down to ancestry and place of birth. Suppose two people fell in love that were born and raised in England. They married and they would be British/English. However, due to a career opportunity, they moved to Ireland and had a baby born in Ireland.  Then is the newborn British only or English or both? Again, this is a geographical discussion still. We would say he is British but not English.

If you wish to discuss citizenship, it depends on the laws of the country. You are only a British citizen if you were born before or after 1983 or before 2006. Different rules apply.ii So now we are discussing citizenship and not ancestry per se.

If this same couple moved to the United States of America and their baby was born in America, the newborn would be a United States Citizen and be neither British nor English. The baby would be an American.

Now this is not to say that the English culture would not be presented to and influenced on the child no matter where the child lived or what the country of citizenship is. In fact, very high probability that the child would act more American or Irish, depending on where he/she grew up.

As you can see, what might have been a very simple answer to a simple question starts to become more and more complicated as time and generations move on. Going back two or three hundred years, the British or the English would most likely look very Caucasian or European. As time moves forward, and people migrate, intermarry, claim different countries of origin and cultures, things start to get a little blurred.

Heritage and citizenships start to get much mingled. So when someone says what is the difference between the English and the British? The correct answer is that it depends on more factors in our modern world than even one hundred years ago. For example, a person from Ireland is part of the EU and is British but a person from Northern Ireland is now not part of the EU and is also British.

Now we have a question of governance creeping in after the United Kingdom Brexit decision. So as you can see trying to answer if someone is English or British is simply complicated. So what can we as humans learn from this? No matter if you are English, British, American, or Asian or African we all have to learn to get along in this wonderful place we call earth. One thing is for sure, we are all earthlings.