Difference between tandoor and tikka 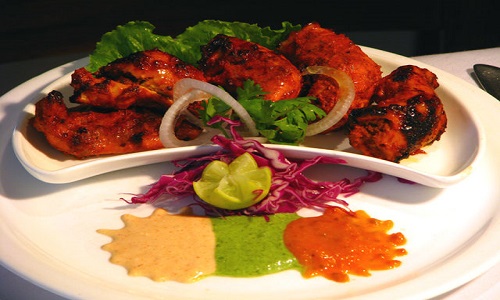 Describing the difference between tandoor and tikka seemed to be a straightforward process at first sight. Far from the truth! When I started to dig into this obviously culinary subject, I discovered a surprise.

Tikka not only refers to a number of dishes, but also to traditional ornaments worn by women all over South Asia. The word dates back to Sanskrit, the Asian mother language, meaning sesame seed, mole or freckle.

Visualize beautiful Indian women, adorned with a gold pendant hanging from a chain exactly in the middle of the forehead. This is a must-have item for Hindu brides.

Tikka also describes the traditional mark on the forehead, worn usually by married women but sometimes also by religious men. It symbolizes fertility and prosperity for women. Men tend to consider it as a sign for spiritual power because it is applied at the place of the third eye. Nowadays, stickers with glitter and crystals often replace the traditional tikka mixture, made from ground sandalwood and turmeric mixed with red powder.

In general, when you hear tandoor and tikka culinary pleasures come to mind. Tandoor is the oven in which tandoori food is cooked. The original tandoor is made from clay and used for cooking all over Asia, starting in Turkey and ending in Bangladesh. Legend has it that the Roma people took the tandoor from their home in the Thar Desert in northwestern India everywhere they went.

This cylindrical oven holds a small fire fuelled by wood charcoal. Many tandoors have a door at the bottom so the cook can regulate the intensity of the fire by the amount of oxygen. Ceramic walls inside the oven create an intensive heat that can reach 900 degrees Fahrenheit (480 degrees Celsius).

Tandoor ovens come in many sizes. Indian restaurants all over the world generally have at least one big tandoor oven. Some sport up to three: one tandoor for flatbreads, one for meat and one for seafood. In Indian cities you see oil barrels recycled into tandoor ovens at many corners.

The big advantage of a tandoor oven is that they will maintain a high temperature for a long time burning only little fuel. Cooking times in a tandoor oven are generally minutes, sometimes only seconds. The Mediterranean equivalent to a tandoor would be a wood fired pizza oven.

Tandoori does not mean a special recipe, it describes the way of cooking. Tandoori food is cooked in a tandoor. Period. It can be naan, the traditional Indian flatbread prepared from light yeast dough or anything that can be stuck on a skewer and lowered into an oven.

Meat, fish and paneer, the Indian cheese, are usually marinated for several hours before they are cooked in the tandoor. A similar marinade, made from yoghurt mixed with spices, is used for tikka dishes.

The Oxford dictionary describes tikka as “an Indian dish of small pieces of meat or vegetables marinated in a spice mixture”. The main difference between tandoori and tikka dishes is the fact that tikka is made from small pieces of proteins, speared by a skewer. Tandoori generally means that a big piece of protein is lowered into the oven.

For example, chicken tikka are marinated pieces of boneless chicken on a skewer while tandoori chicken can be a whole chicken or big chicken pieces, stuck on a skewer. The marinade and the cooking method remains the same.

Discussing tandoor and tikka would not be complete without mentioning Chicken Tikka Masala, created by Indian restaurant owners in the late 1950s to please their British customers. Chicken Tikka Masala has little to do with tikka or tandoor. Although the chicken is marinated and the spice mixture tends to be similar to a tandoor marinade, after roasting the chicken is smothered in a thick, creamy sauce. This has nothing to do with traditional tandoor and tikka dishes, which are served dry, just with a bit of lemon and pickled onions at the side.

However, even the British palate has become more concerning in recent years. Nowadays, the favorite British Indian dish seems to be the Jalfrezi, closely followed by Special Chaat and Massala Dosa.

Recipe for Tandoori Marinade (enough for one chicken):

Mix all the ingredients and marinate for at least two hours or overnight.