Differences Between Nachos and Tortilla Chips 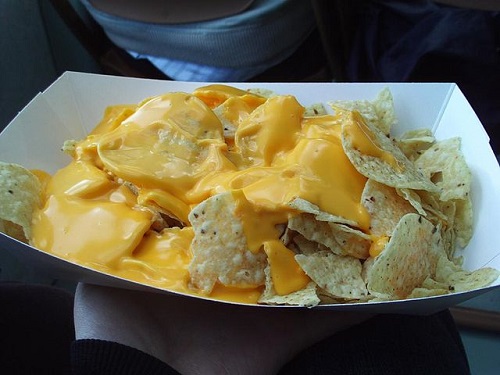 Tortilla chips are the primary ingredient in nachos, however they can also be a stand-alone food as many people like to eat tortilla chips alone. The chips themselves are made using yellow corn, white corn, flour, whole wheat or blue cornmeal. The corn kernals are first ground into flour which is then used to create a coarse dough called masa. The masa is cooked, ground up, formed into chips, baked and finally it is fried and seasoned, typically with salt.[ii] Tortilla chips can also be made at home by simply cutting up and frying corn tortillas. The finished product with both these processes is a chip that is perfect for snacking either alone, with salsa, guacamole or even made into nachos.

Nachos are by definition typically comprised of corn chips as a base. While it is possible that other chips could be used, this is rarely the case. Nachos are created by layering ingredients over a bed of tortilla chips. The defining element is going to be cheese. Nachos simply aren’t nachos without cheese-a nacho cheese sauce, or queso, is commonly used but so are other shredded cheeses including cheddar, Colby jack, pepper jack, or a Mexican blend of cheeses. Aside from the cheese, nachos also typically have meats, beans and/or vegetables and sauces. Common meats include chicken, ground beef, and carne asada (seasoned steak). In rare instances, even a seafood like shrimp could be used. The beans used are not always the same either and there are a variety to choose from, including black beans, refried beans, ranch beans, or even a seasoned mixture of chili beans. With the proteins and cheese picked out, there can also be a number of vegetables that could be added to the nachos either cooked or raw. This is perhaps where the largest variance in nacho recipes occurs. The list of potential ingredients is long and includes: red onion, white onion, green onion, leeks, black olives, jalapeno peppers, tomatoes, cilantro, avocado, lime juice, red bell peppers, green bell peppers, yellow bell peppers, orange bell peppers, habanero peppers, lettuce, and garlic. Many nacho recipes also call for seasoning such as cumin, chili powder, chipotle powder, cayenne powder, black pepper, or even oregano. And finally, nachos typically include some sort of sauces. Common ones include sour cream, salsa, pico de gallo (tomato, onion, cilantro mixture), or guacamole, which is a seasoned mixture made from mashed up avocados. Because of the huge amount of acceptable ingredients, there is a large variance in how nachos are made and served-from the basic chips with cheese sauce to the loaded ones which might have most of the ingredients listed here.

Since tortilla chips are a component of nachos, then it is predictable that nachos will always cost more than a similar serving of the chips alone. Whereas, with the chips you simply have the cost of the chips, with nachos you also have to factor in the cost of all of the other ingredients you would like to use as toppings. So it is no surprise that the cost of nachos can far exceed the cost of tortilla chips. The chips can be found in the supermarket for as little as $2, but typically average around $4. In a restaurant, tortilla chips are typically given to customers for free, but can sometimes cost a small amount of money, usually no more than $2-$3. The average cost of nachos in a restaurant (because supermarkets typically don’t sell nachos) can typically range from $8-$20 depending upon the types of toppings and meat included with them. Some fast food restaurants might offer nachos at a lower price, but they may be a more basic form of nachos and they will still certainly cost more than a side of tortilla chips would at the same establishment. Both of them are typically considered an appetizer, though sometimes nachos can be eaten as an individual’s meal if the portion is substantial enough.

Another key difference between nachos and tortilla chips is going to be their availability. Since nachos require preparation they are going to be much harder to find than the tortilla chips themselves. The chips can be found in almost any restaurant, gas station, grocery store and even in some vending machines. A bag of chips may be eaten now or later. If there are some left over, there is usually little concern about storing them for later. The only potential concern might be that they become stale after they have been exposed to air for a prolonged period of time.

If a person would like to have nachos, they must either commit to going to a restaurant or prepare them at home. This is simply because the meat must be cooked in contrast to the vegetables which mostly remain uncooked and the sauces which sometimes require refrigeration and should only be added to the nachos at the very end of preparation. Because many of the ingredients demand to be served at different temperatures, nachos should be eaten immediately and they are difficult to store and reheat. There are instances in which a very basic form of nachos comprised of simply the tortilla chips and a cheese sauce can be found in places such as a gas station or even a movie theatre.