Difference Between Bison and Buffalo

While bison and buffalo are members of the same family, Bovidae, they do not share the same genus or species.

Location
Bison ‘“ have a natural habitat that covers the majority of the United States, northern Mexico, and southern Canada. In addition to the iconic Plains Bison, there were also abundant Wood Bison; both were hunted to near extinction by the first white settlers. There are also bison native to Europe.

Buffalo ‘“ there are two main species of buffalo: the Domesticated Asian Water Buffalo and the Cape buffalo. The water buffalo has a range that extends across Asia into 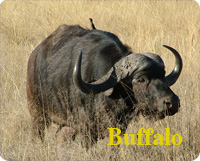 North Africa and southern Europe. Small populations can also be found in Australia and South America. The Cape buffalo is found on the sub-Saharan plains of Africa.

Appearance
Bison ‘“ have a shaggy winter coat that sheds to create a lighter summer coat. The largest bison can top 6 Â½ feet tall, be 10 feet long, and weigh one ton. They have stocky legs and short horns that extend sideways and back from their heads.

Buffalo ‘“ have short, glossy coat. Both varieties are similar in size to the bison, but with much larger horns. Some water buffalo horns have been known to grow up to the entire length of the animal.

Human Interaction
Bison ‘“ have a history with man that is fraught with danger and destruction. Before the arrival of Europeans to the United States, bison were hunted in a sustainable manner by the Native Americans. They would herd the animals into a stampede and force them over a cliff. However, as America began her westward expansion in the 19th century, bison were hunted nearly to extinction. By the 1880’s, some people began to domesticate bison in order to preserve their numbers.

Buffalo ‘“ have been domesticated for over 5,000 years. They are a major source of milk and other dairy products, such as ghee. Buffalo are also still used as farm power in much of South Asia. Some buffalo are also used for their meat, but this is not as common.

Cultural Significance
Bison ‘“ have come to symbolize the Great American West. They represent both the vastness of the plains as well as our need to conserve our natural resources. In many areas, there are bison farms where the animals are raised not only for their meat and hide but also for their tourist value.

Buffalo ‘“ are considered sacred by Hindus and therefore not to be eaten. This taboo is not shared by other religious groups, but across Southeast Asia there are many festivals devoted to racing and fighting buffalo.