Difference between tidal and wave energy 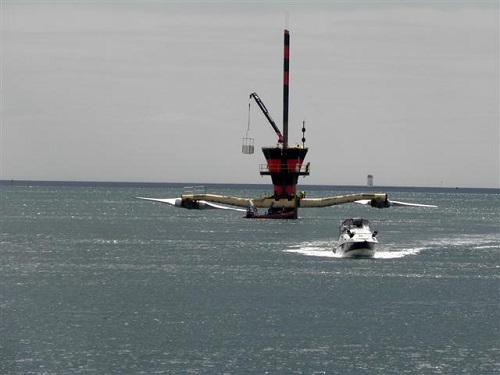 Tides and waves are two natural occurrences that transpire on water and whilst they are similar in that they are related to bodies of water, their ability to generate energy differs in a range of aspects with regards to generation, power and reliability [1]. As the world begins to move away from their reliance on non-renewable energy sources, new and innovative ways for energy generation are beginning to be explored which will have a minimal effect of surrounding environments and communities. Special buoys and turbines are commonly used to capture their power and convert it into clean electricity but like most emerging technologies, they are expensive to design and develop. Despite both tidal and wave energy originating from the ocean, there is still a big distinction between them.

What is tidal energy?

Tides are defined as the rise and fall of sea level caused by the gravitational pull of the moon and the sun on the Earth. They are not only limited to the oceans, but can also occur in other systems whenever a gravitational field exists. In addition, while the majority of the Earth is affected by the gravitational force of the sun, this is not as easily visible on water. The moon itself has a more prominent effect on the tides, as it is much closer to the Earth when compared to the sun. Shorelines experience either a daily diurnal or semi-diurnal tide consisting of one or two high and low tides respectively. These tides are affected by a range of factors such as the sun and moons alignment, the shape of the coastline and changes in water depth.

What is wave energy?

Wave energy, also known as ocean energy is defined as energy harnessed from oceanic waves. As the wind blows across the surface of the ocean, it creates waves and thus they can also be referred to as energy moving across the surface of the water. Waves created as a result of wind are usually referred to as wind waves and they occurs most effectively on water surfaces as there are no land masses to resist the power of the wind [2]. These waves while commonly seen on the ocean surface also occur freely on lakes, rivers and canals and can be defined as either being capillary waves, ripples, seas or swells. No two waves are the same with each wave differing in height and distance between the crests and troughs.

How are tides formed?

As the moon rotates around the earth, it exerts a gravitational pull creating a tide that moves across the earth. As the moon circles the earth, the earth itself moves in a slight circle too and this inertia causes a tide on the opposite side of the earth. This is known as the two high tides in between which the low tides will occur [3]

How are waves formed?

The changing patterns of the speed, duration and distance with which the wind blows will affect the shape of the formed waves. In addition, the shape and size of respective waves formed will also depend on the resulting affecting system and can easily aid in narrowing down the origins of the waves. For example, high, steep waves that rise and fall quickly are newly formed and often the result of nearby weather systems like local storms while long steady waves are usually formed from extreme weather conditions occurring much further away, sometimes from storms that may even be in another hemisphere.

This energy from the waves can be harnessed and used for a range of useful activities such as electricity generation, desalination and pumping of water into reservoirs. Often referred to as wave power, the stronger the waves, the greater the ability to produce energy. The rough vertical motion of oceanic waves contains a large amount of kinetic energy which is captured by wave energy technologies. Wave energy is usually harnessed using two types of systems, namely off shore and on shore systems. Offshore systems operate in deep water and utilise either pumps or hoses to collect energy via rotating turbines. Onshore systems on the other hand are built along shorelines and harvest energy from breaking waves. One of the advantages of wave energy is that it is replenishable and sustainable as waves will always wash ashore depending on the weather conditions and most likely will not stop forming for a long period of time. In addition, since these commonly utilised technologies are not easily visible by nearby communities, the effect on aesthetic value is low making them a more easily accepted technology to use. While it is a renewable energy source, it is difficult to convert this energy into electricity efficiently. Equipment has also proved to be difficult to develop and design such that they can withstand damages from storms and corrosive action from surrounding saltwater. However while many of these technologies are cost effective, it is not as cheap when compared with other energy generating systems.

To date, there are three main types of wave energy technologies. The first uses floats or buoys to generate electricity from oceanic swells which drive hydraulic pumps. The second type uses an oscillating water column to generate electricity from the rise and fall of water inside a cylindrical shaft. This is usually done at the shore. The water drives air out of the shaft which in turns powers an air driven turbine. The third type utilises a tapered channel with is located either on or offshore. This technology concentrates waves and drives them into an elevated reservoir where power is generated using a turbine [5].

While all coastal areas experience high and low tides, this energy can only be harnessed and used for electricity production if the difference between the high and low tides is large enough. The main types of tidal energy include 1) kinetic energy obtained from the currents of changing tides and 2) potential energy obtained from changing heights between the high and low tide. One of the advantages of using tides as a source of energy is that it is more reliable since it is based on the gravitational pull of the moon and can thus be predicted. That being said, while it can be predicted, one of the disadvantages is that this source will only generate energy for 6 – 12 hours at a time thereby reducing the prolonged availability [4]. This intermittent energy production creates a less reliable energy source. Harnessing this energy can disrupt natural migrating routes for marine animals and regular boating pathways. Turbines used for energy generation can kill a large amount of fish in the area. That being said, the ability to uses tidal energy as a source of electricity may subsequently decrease reliance on coal driven generating sources which will in turn reduce the amount of CO2 emissions.

Commonly used technologies for tidal energy generation include tidal dams or barrages which contain a sluice across the water body. Beyond the sluice are hydro turbines. As the tide changes, the uneven water levels pushes through past the sluice and powers the turbine [5]. Over time however, a great deal of downstream effects on the both the shoreline and surrounding marine ecosystems were noticed resulting in the development of a range of newer, more environmentally friendly models. These include tidal lagoons, tidal fences and underwater tidal turbines.

We have already defined that tides and waves are formed under completely different conditions. Tides are the rise and fall of the ocean caused by the gravitational pull of the moon and sun on the earth while waves are the wind energy moving across the surface of the ocean thereby making waves much easier to measure as when compared to tides. Tides are less noticeable as when compared to waves and can most commonly be seen on the shorelines affecting the amount of visible water and sand. Waves on the other hand can be seen on the surface of the ocean rising and falling. While tidal power fluctuates daily and wave power may be a more sustained source of energy, it not widely used as only a small number of test sites exist globally [4].