Difference Between Ferret and Weasel 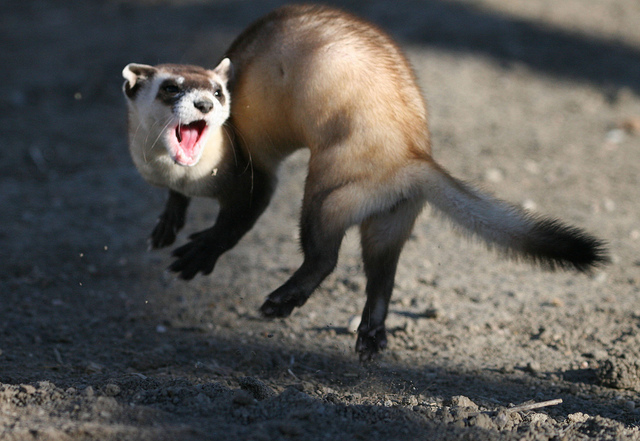 Weasel and ferret are some of the confusing animals unless closely looked at. One seems to be a cousin of the other with both having long tubular bodies although in different dimensions. They belong to the scientific parental name Mustelidae. However, there are remarkable differences between these species as this article unfolds as follows. 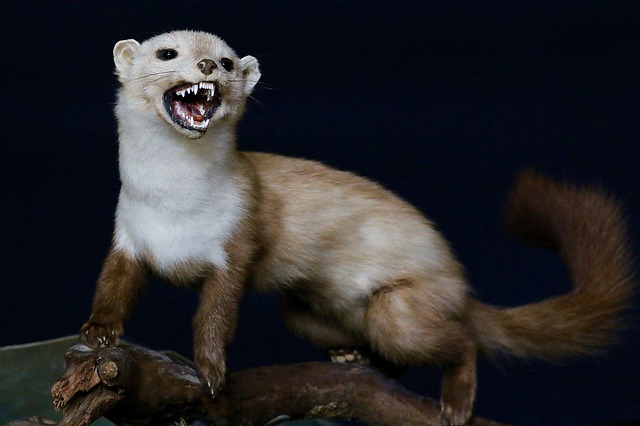 What is a Weasel?

With a long, tubular body and a long-tail, weasel is a wild and often a solitary animal compared to ferret. It has a thin body which often comes to its advantage when hunting its prey in the small openings. Typically, the body size of a weasel ranges from 6.8 to 8.5 inches. It has a long tail which also gives it a balance when hunting its targeted prey. The females are smaller than the males.

In appearance, weasel has a red brown coats with a white underbelly coat. The picture below depicts the difference between these animals.

Weasel is seldom made a pet due to its aggressiveness even to human beings. It is notorious of preying on poultry hence many homeowners rarely consider it as a pet. Weasel hunt snakes, birds, mice, rats and rabbits. It can even kill for a trophy as most of its kills are left uneaten. Unlike ferret, weasel is not a nocturnal animal. It sleeps at night and hunt during the day. Also, weasels seldom go in groups as they often fight.

In the Mustelidae family, there are 17 species and weasels belong to the 10 of the 17 species. On the other hand, the ferrets are the subspecies in the polecats division of Mustelidae. Both these animals have a thick fur and a thin body. Hunting habits, characteristics, and appearance are different.

What is a Ferret?

As highlighted above, a ferret falls under the polecat division of the Mustelidae. A ferret has a longer body with a shorter tail when compared to the weasel. Because of their companionship, ferrets have been domesticated for over 2000 years. They can keep rats, mice and snakes in control in the household hence they are liked as pets. Moreover, ferrets can be found in groups, unlike the weasels.

Ferrets are crepuscular and nocturnal animals and can hunt their prey to drink the blood. Typically, a ferret has a black brown coat with some white additions. Ferrets are generally bigger than the weasels but have shorter tail about 5-inches whereas weasels’ tail is about 13-inches long. Ferret can grow up to 24 inches while weasels range from 5 to 18 inches.

Key differences between weasels and ferrets

Origin of Weasels Vs. Ferrets

Both ferrets and weasels fall under the scientific name Mustelidae. Weasels are part of the 10 species of the 17 species in Mustelidae. Ferrets, on the other hand, are subspecies within the polecat division of Mustelidae.

Appearance of Weasels Vs. Ferrets

Body and tail length for Weasels Vs. Ferrets

Behavior and hunting of  Weasels Vs. Ferrets

Weasels are solidary creatures because they fight if they are in groups. Also, they hunt during the day and sleep during the night. Ferrets, on the other hand, are nocturnal creatures. The creatures feed on meat, i.e. mice, rats, snakes, rabbits, and many more. Weasels can kill and leave some their kill untouched. Ferrets can kill and drink the blood of their kill.

Companionship of Weasels Vs. Ferrets

Ferrets have been domesticated for over 2000 years in many countries because of their companionship. They can be good deterrents of snakes and rats in households without posing danger to the owner. Weasels, on the other hand, are not user-friendly creatures. They can be aggressive and wild to human beings hence they are seldom tamed. Ferrets can be taught tricks. Weasels can, however, be domesticated at a very young age before maturity.

Comparison Chart  of Weasels Vs. Ferrets 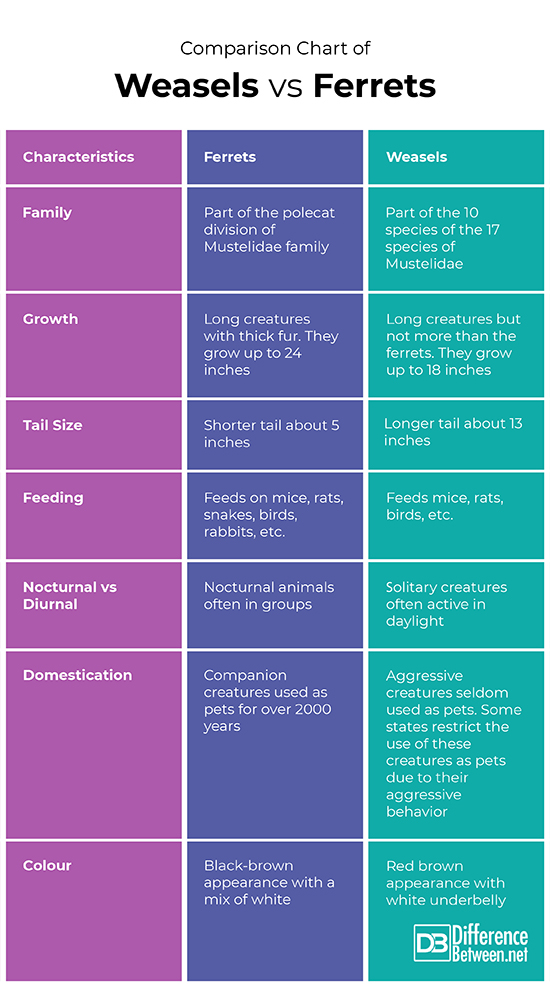 Summary of Weasels Vs. Ferrets