Difference Between Boys and Girls 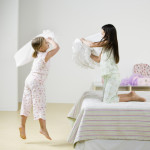 One of the universal complexities that have existed since the dawn of man is sexuality. And the more complex part is that there’s not one, but two. There’s the male and the female or simply, boy and girl when pertaining to human beings. Over the millennia, stereotypes were established to define each sex. The definition proves complex as well. A boy and a girl are different from one another in almost every way- anatomically, physiologically, psychologically and in terms of cultural standing.

Anatomically and physiologically, it’s not rocket science to identify a boy from a girl. The primary differentiating factor is the genitalia or reproductive organs. In seamless accordance with their reproductive roles, a boy is equipped with a penis and a pair of testes. The duo is responsible in the production and dissemination of male reproductive cells called sperm cells. A girl, on the other hand has a vagina which connects to the uterus and ovaries. The ovaries periodically produce an egg cell, the vagina serves as a pathway for the sperm cells, and the uterus houses both the egg and sperm cells for maturation.  Abundant presence of testosterone in a boy’s body would explain denser hair in the face and throughout the body and other masculine properties such as lower-pitch voice and leaner, muscular built. Girls have mammary glands and would normally have more pronounced fatty tissues compared to boys. Such properties are due to high estrogen levels in their body.

The differences become more complex in the field of psychology. Studies show that girls have higher emotional and social regard as compared to boys. In other words, they are generally more empathic in nature. In addition, girls are better at multi-tasking, meaning they are naturally more able to use both sides of the brain when processing information. Boys on the other hand are innately drawn to thrill and action. They are more inclined to matter-of-fact or straightforward communication and social interactions.  It takes longer for them to react on emotive stimulants, making it difficult for them to adapt quickly in emotionally-challenging situations. Such limitation can also affect their learning curve. Furthermore, modern research shows that boys are more inclined to mobile activities, are more physical than verbal, like being in a group and are relatively fearless. In contrast, girls develop verbal and gesture communication abilities sooner, are better at listening, and are better with their hands.

Culturally-speaking, boys have been favored by society for many centuries. In fact, some countries still retain such bias up to now. Boys were considered the superior kind. They were allowed to take authoritative positions at work, to participate in politics, to vote, to have the last say in the family, to acquire properties, and to choose their women. Girls were anything but empowered back then. They couldn’t do what their counterpart could. And their roles were limited inside the household and in the bed. In modern society, however, girls grew more empowered. For the most part, they now enjoy a set of rights and opportunities equal to that of boys’.