Difference Between Lambs and Sheep 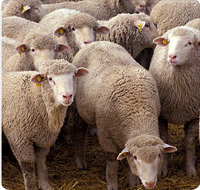 Sheep were one of the first animals to be domesticated and are still prized today for their abundant supply of wool, milk, and meat. Today, there are over one billion sheep being grazed in various parts of the world, most notably China, Australia, the United Kingdom, and India. For a layman, it might be difficult to tell the difference between a sheep and lamb, but for a sheep farmer, the differences are numerous and important for turning a profit on their farming venture.

Categorization of Sheep
Sheep refer to the species Ovis aries. They are livestock animals, ruminants, quadrupeds, and mammals. Sheep is the overall name of this species but they are sub-divided into various other categories. Lambs refer to young sheep that are less than one year old. Ewes refer to female sheep over a year old. Rams are un-castrated male sheep aged more than one year. Mature castrated males are called wethers. Therefore a lamb is a subcategory of sheep that signifies its young age.

Sheep and Lambs as Food
Knowing the age of sheep is important for a sheep farmer looking to maximize his profits. Both sheep and lambs can be slaughtered for food, but lamb meat fetches a much higher price than sheep meat, more commonly known as mutton. The meat is considered lamb meat all the way up until the end of the sheep’s first year. As soon as that threshold has been crossed, the meat becomes less desirable mutton. Especially in countries where not a lot of sheep meat is consumed overall, such as the United States, leg of lamb and lamb chops may be the only cuts of meat on the market. It is tender enough to be eaten separately. Tougher mutton is often roasted or stewed before consumption.

Diets of Lambs and Sheep
Sheep are ruminants, which mean that they are strict herbivores that graze on a variety of grasses and legumes. Mature sheep have eight incisors. Every year after birth a pair of them erupts until all eight are in place. This ensures that for the first four years a sheep is eating solid food. It always has a pair of sharp teeth to cut off the grass. Lambs are born with milk teeth that aren’t strong enough to provide them with all their nutrition through grazing. Lambs feed on their mother’s milk. Sheep milk has a high fat and lactose content and is very good for promoting growth. Once the first pair of incisors erupt, the lamb stops feeding on milk, beginss grazing and is then termed a sheep.

Summary:
1.Sheep are the general name given to the species Ovis aries and lambs are a subcategory of sheep denoting young sucklings.
2.Lamb meat is more tender and desirable than sheep meat, or mutton. Sheep meat can be classed as lamb until the sheep’s first birthday.
3.Sheep feed on grass and legumes whereas lambs drink a high fat diet consisting of their mother’s milk.