Difference Between Monocots and Dicots 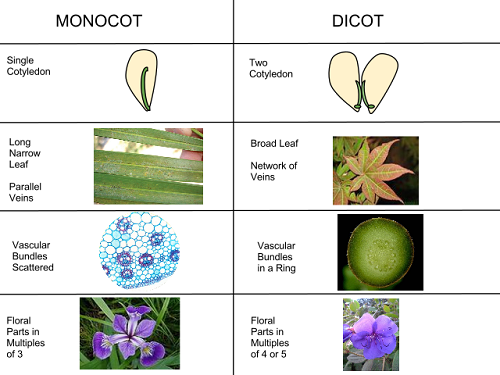 The Anthophyta phyla, also called the flowering plants, are classified into two distinct classes. The first is the Monocots, which are scientifically called Monocotyledons, are one of the groups of flowering plants. The second group is called the Dicots or Dicotyledons. These two classes of flowering plants are distinct and different in their basic composition. The monocots consist of one seed leaf, which is called the cotyledon, while the dicots are made up of two embryonic leaves. In fact, the names of the classes are based on the seed leaf it produces, which is Monocotyledonae or one cotyledon and Dicotyledonae or two cotyledons.

Based physical appearance of the flowers, the monocot flowers would have petals that are usually divisible by three. Hence, its petal counts are commonly at around three or six. The dicot plants would have petal counts of around four, five or more. This distinction, however, is not that reliable, as some dicot plants have only three petals.
Plants have this vascular stem arrangement that is called the vascular bundles. The appearance of the bundles is circular. To see this clearly, a cut across the stem would show the ring of spots appearing in a cylindrical motion. For monocots, these bundles would appear scattered all throughout the stem with the stem periphery being found in the center. The dicots would have the vascular bundles centralized in concentric circles.

To distinguish them further, you can refer to the plantsÃ­ root development. In dicots, it would start at the bottom of the embryos that are called the radicle. Eventually, the production of the radicle will create a root tissue that will be present much for the life term of the plant. In monocots, the radicle is eradicated from the plant. The development will adventitiously begin from the nodes of the stem. Consequently, it is known as prop rots as they are usually clustered in the bottom of the stem.

When it comes to the leaves, the monocots would often exhibit a parallel output from the point of the leaf in the stem down to the end. Dicot leaves, on the other hand, usually have an appearance that sometimes reticulates between the major veins of the leaf. When it comes to secondary growth, the monocots do not have the ability to produce wood and bark. Dicots increase its diameter through secondary growth. Thus, it produces wood better. Cereals and grasses are common examples of the monocot plants while fruits, vegetables, spices, and roots are often considered as dicots. Simply, the dicots are producing the food that often form your daily diet.

1. Monocots have one seed leaf while dicots have two embryonic leaves.
2. Monocots produce petals and flower parts that are divisible by threesÃ­ while dicots form around four to five parts.
3. Monocot stems are scattered while dicots are in the form of a ring.
4. Monocots technically, do not produce wood or bark while dicot plants do.