Difference Between Oligopoly and Monopolistic Competition 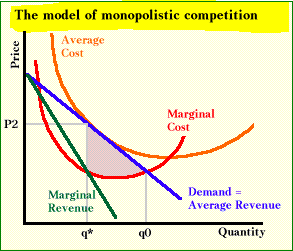 However, economists look at the bigger picture, and so, they are always in pursuit of evaluating wider trends so as to understand the factors that motivate consumers to know how this information will impact a large segment of the population. Therefore, according to them, the market structure is basically a manner in which markets are organized on the basis of a number of firms in the industry. There are four types of market structure, including monopoly, perfect competition, monopolistic competition and oligopoly. Monopoly, as the name suggests, just has a single firm. Perfect and monopolistic competition have a large number of small firms, whereas, oligopoly consists of fewer firms that are relatively large in size.

For the purpose of detailed understanding, oligopoly and monopolistic competitions have been explained in greater depth along with their major differences.

As already discussed, it represents a structure, which contains a fewer number of relatively larger firms with substantial barriers to entry of other firms. A high level of concentration is observed in the market as it is shared by a few firms. Firms, operating in an oligopoly market, do not have a lot of competition. Therefore, they have to consider the reaction of its close competitors while taking any business decision. For example, if Texaco plans to increase its stake in the market by lessening the product price, it has to take into account the likelihood of its rivalries, like British Petroleum, reducing their prices as a consequence.

As far as the market strategy is concerned, firms in the oligopoly market structure have to take key decisions regarding prices and competition. For example, they have to figure out whether they wish to compete with competitors or come to a common understanding with them; it also includes a decision to change the price or keeping it constant. Furthermore, it is also vital for them to decide if they should be the first to impose a new strategy or wait for the competitors’ moves. The benefits of going first or second are known as the first mover and second mover advantage. Sometimes, it is better to take the initiative as it enables a firm to make sufficient profits, and other times, it is better to wait and see what competitors have to offer.

On the other hand, in a monopolistic competition, the structure contains a large number of small firms that can exercise a freedom of entry and exit. In this model, every firm has multiple competitors, yet, each one of them offers slightly different goods. In this cluster of enterprises, each one takes independent decisions about the price and outcome by keeping in mind the market it operates in, a product it sells, and the related cost of production. Although, there is a greater flow of knowledge in the market, yet, it doesn’t depict a perfect market.

Since all the firms involved in monopolistic competition offer unique products, it enables them to charge a lower or higher price than their competitors, which also indicates that demand curve will be plunging. Under the monopolistic competition, firms usually go for advertising to market their products, because of the high level of competition with their rivalries. Advertising helps them in introducing the distinctive features of their product as compared to the rest of the market.

Moreover, such firms are considered to be profit maximizers. This is because their businesses are smaller, which allows them to keep their focus in managing a business.

Both monopolistic competition and oligopoly depict an imperfect competition. Following are some of the major differences between these two market structures:

The main difference between both the market structures is a relative size and market control of these firms on the basis of a number of competitors in a particular market. However, there is no dividing line between these structures, for example, there is no clear definition of how many firms should there be in a market in order for it to be a monopolistic competition or oligopoly market.

Dominance – An Indicator of the Structure

There are a few cases where it is the dominance of some firms that determines the type of structure a market has. For example, an industry that consists of 4000 relatively same firms is mostly considered as a monopolistic competition, whereas, an industry with the same number of firms, out of which, only 4 are relatively large and dominating, is known as the oligopoly market. The most prominent example of oligopoly market is petroleum industry, wherein, despite having a large number of companies, the market is dominated by a few major companies.

Small towns are comparatively less equipped with such retail outlets and have only a few stores. It may only have one shopping mall and a small number of stores present in a downtown area. Such a structure is called oligopoly.

As it has already been discussed, oligopoly represents high barriers to entry as compared to the monopolistic competition, but it is a matter of degree. The key element that can give rise to oligopoly market is a requirement for government authorization, especially in circumstances where entry is restricted to only a few firms. On the other hand, it can also be representative of monopolistic competition if a large number of firms are allowed to enter into a market.

Apart from government authorization, resource ownership and startup cost also restrict the entry of firms at different levels, leading to either of the two structures. These barriers keep changing from time to time, transferring monopolistic competition into an oligopoly and vice versa.

All in all, each market structure represents its own specific traits and has a tendency to show variation as the time goes by, with the change of geographical area, market size, trends, and demands for a particular product. Understanding each structure is very important for a business and even for a consumer in order to take their strategic decisions successfully. In both the markets, firms take control either by controlling the supply of their respective products or services so as to elevate the demand, or by controlling prices, and hence, controlling what a consumer pays for those products.