Difference between Socialism and Communism 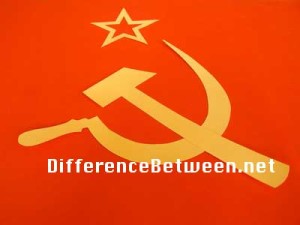 Socialism is commonly regarded as an economic system that seeks to achieve equality among members of society. Communism, on the other hand, is both an economic system that seeks equality among members of society and a political ideology that advocates a classless and stateless society and rejects religion. It is regarded as a more extreme form of socialism.

The views of socialism and communism also differ in the distribution of wealth produced by the economy. Socialism supports the view that the goods and services produced should be dispensed based on the productivity of an individual. In contrast, communism believes that the wealth should be shared by the masses based on the needs of the individual.

There are two kinds of properties in socialism: (1) personal property that an individual can own and enjoy; and (2) industrial property that is dedicated for the use of producing society’s goods. Individuals, for example, can keep their digital cameras but cannot retain a factory that produces digital cameras. While personal properties can be kept, socialists make sure, however, that no private property will be used as an instrument for oppression and exploitation. In comparison, communism treats all goods and services as public property to be used and enjoyed by the entire populace.

Finally, socialism and communism differ in their views on capitalism. Socialists regard capitalism as a threat to equality and public interest. They believe, however, that there is no need to eliminate the capitalist class because it can be used as a good instrument in the transition to socialism as long as it is properly controlled. Socialists also believe that capitalism can exist in a socialist state and vice versa. From the point of view of the communists, capitalism must to be destroyed totally in order to give way to a classless society.

1. Socialism is an economic system while communism is both an economic and political system.
2. In socialism, the resources of the economy are managed and controlled by the people themselves through communes or councils while in communism, management and control rest on a few people in a single authoritarian party.
3. Socialists distribute wealth to the people based on an individual’s productive efforts while communists farm out wealth based on an individual’s needs.
4. Socialists can own personal properties while communists can not.
5. Socialism allows capitalism to exist in its midst while communism seeks to get rid of capitalism.