Difference Between a Buccaneer and a Pirate 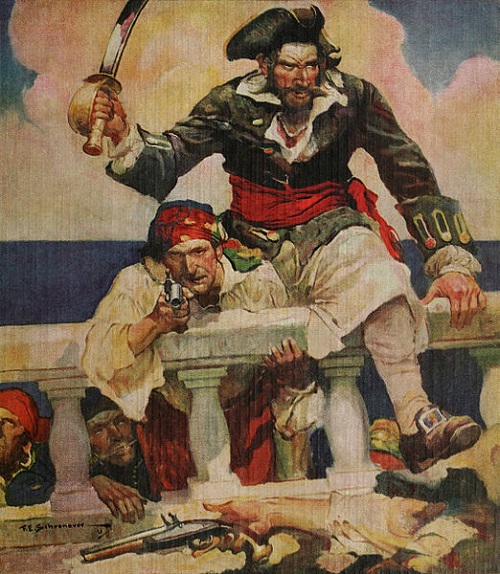 The terms pirate and buccaneer are often used to indicate the same thing; in practice, they are often considered interchangeable. However, there is a distinct difference between the two

­The first true distinction between the two is going to be in the actual meaning of the terms. When speaking about pirates and buccaneers, the image that each term inspires, is typically that of the traditional pirate. However, a buccaneer is a defined and distinctly separate sub classification of pirate. So while all buccaneers are considered pirates, not all pirates are buccaneers. Buccaneers only existed for a short period of time; they were active beginning in the 1600s, and by the early 1700s, buccaneers were extinct. The name buccaneer comes from the French word ‘boucan,’ which is a smoked meat made from wild pigs and cattle. The men who became buccaneers started by selling these meats on the coast to ships passing through. Once they realized that they could earn more through piracy, they began a life of thievery.[i]

The term pirate is a more general term that refers to any type of thievery on the open seas. Pirates, in a traditional sense, would attack any ships or towns along the coast with the intention of robbing anything of value or kidnapping prisoners to hold for ransom. They are thieves with a boat. The term can even be used to describe anyone who escapes by sea travel. This includes a wide variety of people, ultimately meaning that the term pirate is much more encompassing than buccaneer.[ii]

Another major difference between a buccaneer and a pirate is going to be in the relationship each has with their own nationality as well as other nations. Buccaneers came from the island of Hispaniola. They were a distinct group within their population and once they were extinct, so too was the socio-ethnic group that included them. As a population, they were very rugged men who could weather extreme conditions. They also became very adept at sharpshooting and quickly began working with French and English privateer ships who were busy fighting the Spanish ships.

Since pirates are ultimately a lawless group, they will typically renounce any national affiliation once they adopt the lifestyle. In practice, they do not work or work for other countries and they do not discriminate when taking hostages. They do not consider victims of any nationality to be off limits.[iii]

Since the national affiliations of the two groups are very different, it would make sense that their legal status, or the legitimacy of each group, would also differ. Since pirates do not typically exert allegiance to any nation, and their sole purpose is to commit the act of robbery and/or criminal violence, they and their actions are globally condemned. There is no legitimacy to their actions that can be validated by any country and they are typically punished harshly when captured.[iv]

The legal status and legitimacy of buccaneers is a bit murkier and ambiguous. Since they worked for the French and English at times, they called themselves privateers. A privateer refers to an individual who served on a private ship that was encouraged to attack enemy ships and ports. They would have the official sanction and protection of the sponsoring country, and the country would, in turn, receive a share of the profits gained by these endeavors. A privateer only engages in warfare with the enemy and never with allies. For these reasons, their actions were considered legal-at least to the nations that sponsored them. Since buccaneers considered themselves to be privateers, they would frequently sail under the protection of the letter of marque, which would be granted by British, French or Dutch authorities. However, these letters were frequently fraudulent and legally invalid. It was an era of widespread illiteracy so they could essentially pass off any letter as being legitimate even if it was not. Further, even in instances when the buccaneers had a legitimate letter to operate under, they would often fail to comply with the required terms of warfare under these circumstances and would frequently attack the enemy at times when there was no order to do so. Their ambiguous status was exploited by the Spanish when captured. They were frequently punished, usually by hanging or guillotine, without regard to whether the attacks were licensed by another country.[v]

Since piracy has existed since the beginnings of ocean and sea travel, it has occurred in almost every region of the world. The earliest documented acts of piracy occurred in Aegean waters and spread throughout the Mediterranean Sea. From there, it spread to every region that experienced heavy travel, including Africa, Asia, the Persian Gulf, the Caribbean Sea, and the Americas.[vi]

Since buccaneers originated from Hispaniola and frequently attacked Spanish ships, they almost exclusively operated in the Caribbean Sea during the brief time in which they engaged in attacks.

The history and record of pirates is much longer and varied then that of buccaneers. Buccaneers operated in a distinct era of history and died out not long after, which means that their historical legacy is brief and complete.

The first documented act of piracy occurred in the 14th century B.C. Since that time, pirates have operated in different regions around the world. They also go through periods of popularity, which wanes at other times. Pirates still exist in the modern world and anyone traveling in or around Somalia are typically advised of the danger. This means that the history of pirates is incredibly long and will likely extend into the future.[vii]