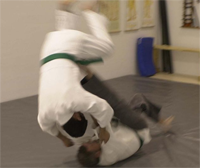 Marital arts has taken the fancy of many, either as a sport or as an art form. Across the globe, people are practicing different forms of Martial arts as a self-defense technique without use of weapons. Samurai evolved the Jitsu martial art as a battlefield yielding technique, to handle the opponents without weapons.

Over time, Jitsu practitioners from various parts of the world transformed this martial art into a different style. JuJutsu, Ju Jitsu and Jiu Titsu are some of the variations of the famous yielding art, which uses similar movements, style, throwing and locking techniques to achieve the set objective.

Jiu Jitsu has its roots in Japan. Hence, they have many defense techniques adapted from traditional Japanese Jitsu. In this form, a defender uses blocking techniques to avoid the opponent’s attack. He also executes a technique to handle a number of things involved in an attack. Dojos practice Jitsu marital art in order to handle real life attacks involving weapons, and more than one attacker. Back then, Jitsu techniques proved effective. Hence, today we could use the same technique for self-defense.

In Kote Gaeshi, or Wrist Twist technique in Jiu Jitsu, a defender will evade a punch and turn the hand downwards. Then turn the body away from the attacker while still holding the hand to pull the assailant forward. Before which, the defender faces the attacker, and twisting the wrist inwards inflicts pain and diffuses the assault. While in the Ippon Seoi Nage technique, the defender executes the defense technique before plunging the attacker towards the ground.

If you are interested in Japaese Jiu Jitsu, then be ready to learn techniques resembling the traditional Dojo Martial Arts techniques. The masters stress the importance of etiquette, and most often, they use Japanese language to give commands. Even though the training place is full of shouting from masters and students, the entire learning process is fun and encouraging. This is one of the best ways to learn self-defense.

Contrary to the blocks and twists used in Japanese Jiu Jitsu, the popular Brazilian Jiu Jitsu has evolved the techniques used from the ground game. They use the body’s position to lock the opponent, and hold him to the ground to subdue the attack. This technique is more to beat out the rhythm of the opponent, using an endless number of techniques to counter the attack. This Brazilian Jiu Jitsu has been evolving with an increase in the number of players who learn this art in a fun environment. Competitions organized to display talents has attracted many towards this form of art.

Since the technique pins the opponent to the ground, it is important to wear a protection guard for the stomach area.

Â· Brazilian Jiu Jitsu pins the opponent to the ground and uses ground techniques to subdue the attack.

Â· Jiu Jitsu also concentrates on self defense movements to handle multiple attacks and weapon use which resemble a real life situation.

Â· Brazilian Jiu Jitsu concentrates on the defense from one attacker at a time.