Difference between leggings and jeggings 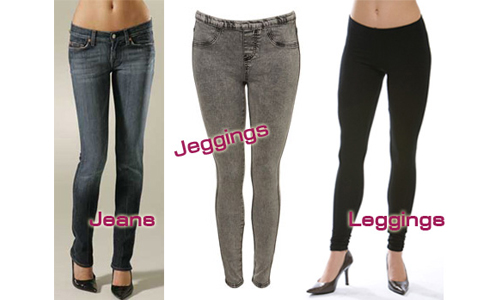 With the fashion industry becoming more and more important in the 21st century, there have been many new designs that have hit the market and garment stores with a bang and have been able to grab a huge market share of the clothes that sell. Not only have there been new cardigans replacing old, new designs have made sure that you do not want to resort to the clothes in your wardrobe as they are ‘old-fashioned’. Many of you, especially males who do not take much interest in the prevailing fashion amongst women may not even have heard the terms jeggings or treggings.  If any of you has no idea what we are talking about, let us just say that they are similar to leggings! Now you know what we are talking about! However we cannot use the word leggings to remember the other two as they are not all the same. There are some differences amongst them as we shall soon see.

Leggings are garments that are skin tight and cover the legs. They are normally worn by men as well as women. Previously, there would be a pair of leggings, one for each leg although now there is just one garment that is somewhat a joint pair. In contrast, jeggings are basically of two types. One of these types is similar to legging material make and resembles denim. They have fake pockets and even belt loops. The other category, however, is more of a cross between legging material and denim. What is termed as ‘denim jeggings’ are merely made of up denim fabric but have the elasticity of leggings. It is more like a better combination. Jeggings became famous when skinny jeans were in demand at the beginning of the 21st century and people wanted even tighter pants. Jeggings were made up of a denim/spandex blend and would be worn under a skirt or sometimes a dress. Moving on, jeggings are sometimes made in such a way that they have front fastening facilities. Others, however, have elastic waistbands and lack pockets.

Tights are thick and opaque hosiery that are worn with pants and dresses. They usually come in black color, fall shades and sometimes also have textured patterns. Leggings are just thicker tights and are also almost always in black color. They are designed to be worn in the way that skin tight pants are supposed to be worn. Jeggings, on the other hand are designed in a way that they resemble tight jeans. The stitching is such that there are fake pockets and a fly front.

Moving on, leggings are usually made of softer material when compared to jeggings, which are skin tight stretchy denim. Jeggings not only look like jeans but also have button(s), a zip and sometimes real pockets. The waist is made to be elasticated. Leggings come in different colors as well as fabrics. They can be of polyester, Lycra, nylon, cotton etc. In winters, some people normally prefer Acrylic leggings whereas others prefer woolen ones. There are also those who would rather have leather leggings. Jeggings also come in various colors but since they are simply leggings that look like skin tight jeans, they usually come in jeans colors and designs such as faded, blue, black, torn etc. They are very comfortable as well as trendy and due to their tight fitting, make you look very good with an extra emphasis on your curves.

1. Leggings are garments that are skin tight and cover the legs, worn by men and women; jeggings-of two types; one is similar to legging material make and resembles denim,  have fake pockets and belt loops, the other is a cross between legging material and denim, ‘denim jeggings’ are merely made of up denim fabric but have the elasticity of leggings, some have front fastening facilities, others have elastic waistbands and lack pockets, usually only worn by women

2. Leggings-thicker tights, almost always in black, to be worn in the way that skin tight pants are; Jeggings-leggings that look like tight jeans, stitching-fake pockets and a fly front

3. leggings are usually made of softer material when compared to jeggings which are skin tight stretchy denim