Differences between Army and National Guard 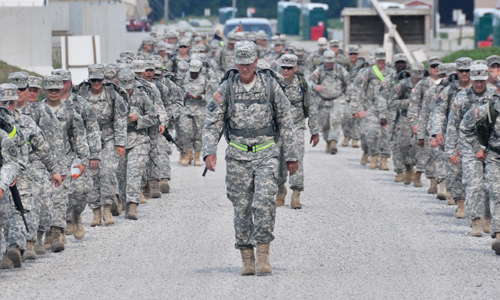 We all must have come across the words army and National Guard. Both of them are forces that every country has and the main task of these forces is to protect the country and its people under any possible sources of violence or distress. However, these are just two of the many forces that include the navy, police force etc. All these forces are concerned with the security of the nation but there are various tasks that each force caters to. And that accounts for the differences amongst them. Let us shed light on two of these services, namely the Army and the National Guard.

The word army comes from the Latin arms that means weapons. The army, in effect, is a fighting force that is unique in the sense that it fights on the land. It is that branch of the military that is based on the land. It may also be known as the land-based branch of a service such as the armed service of any nation or state. Army may also mean field army which is different from the army reserves; the latter being called during times of natural disasters or war. In contrast to this, National Guard usually refers to a militia, or a military force, a paramilitary force, a police force or a gendarmerie. The role of the National Guard is dual in nature. Most of the times, individual states control it. In that case, the state governor is the commander in chief. The president still has the power to activate the National Guard and bring it under federal control. If that takes place, then guard units supplement the regular army, adding to it combat units in order to bolster its forces. This usually happens when emergency is declared. If the president chooses to federalize the National Guard Troops, then they are no more limited to be used within their home states only. Their responsibility is now the whole nation. An example would be that of hurricane Katrina in which the National Guard of various states was summoned. Similarly, in times of war, the National Guard may be called upon. In World War I, 40% of all the US combat troops were actually part of the National Guard units.

Furthermore, the army has regular training sessions. This is not applicable for the National Guard that trains once every month. The training is usually on a weekend. In addition to this, there is another two-week long training session every year.

Whereby the army remains the same force over several decades with no major changes being made and the same hierarchy being followed for many years, the National Guard is subjected to a lot of variation with changing governments. Its existence and functioning is determined by the Constitution which creates clauses that outline states’ right to create such militias and to the extent the federal government can use them in cases of emergency.

1. The word army comes from the Latin arms that means weapons, a fighting force that fights on the land, It is that branch of the military or armed service of any nation or state that is based on the land; National Guard usually refers to a militia, or a military force, a paramilitary force, a police force or a gendarmerie

2. Army is always under the control of the president; National Guard is controlled by individual states, state governor is the commander in chief, president still has the power to activate the National Guard and bring it under federal control in times of emergency (natural disasters, wars etc.)

3. Army is the first line of defence in wars; National Guard summoned if needed

5. Army remains same over many years; National Guard subject to change with respect to government changes