Difference Between Yogurt and Sour Cream 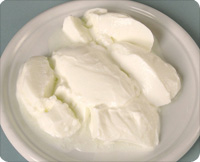 Many people just adore dairy products. They can be used as condiments, or as an ingredient in many dishes, all around the world. Fermentation is a fundamental process in many dairy products. Yogurt and Sour cream are two of these wonderfully fermented dairy products.

Sour cream is made primarily of cream. It has been used for a long time as an ingredient in Eastern European cooking. The pleasant tang that it provides to many dishes is truly great; hence, culinary experts from different regions value the taste that it provides.

The sourness in its taste is rather mild, and it is caused by its acidity obtained by fermenting the cream. To accomplish this, a bacterial culture is introduced, and consequently, sours and thickens the cream. This fermentation procedure is sometimes dubbed as ‘souring’. Souring can also be done naturally, and this is when unpasteurized cream is left to sour by itself, from the bacteria it contains. This is the traditional way of making sour cream.

Like sour cream, yogurt is also a fermented dairy product. It is produced by introducing bacterial culture to milk. Lactobacillus bugaricus, Lactobacillus lactis, Lactobacillus helveticus, and Streptococcus thermophilus are the types of bacteria used in fermenting milk. After adding the bacteria culture and incubating it, re-pasteurization is no longer needed.

It is already an old food item, as it has been produced for at least 4,500 years. It is a favorite type of snack, and is often served as a cold dish, with additional flavoring or mixed with fruits or jam. There are many beverages nowadays that are also yogurt-based. Yogurt is known to be highly nutritious as it is rich in protein, calcium, riboflavin, vitamin B6 and vitamin B12. It is also known to boost immune response.

1. Yogurt is fermented milk, while sour cream is made of fermented dairy cream.

2. The bacteria introduced to make sour cream is different from the ones used in yogurt.

4. Sour cream is often used as a condiment, while yogurt is often served as a snack food.

5. In terms of discovery, or date of production, yogurt is much older than sour cream.

6. Sour cream is very high in fat and not as nutritious as yogurt. Yogurt is high in nutritional content.