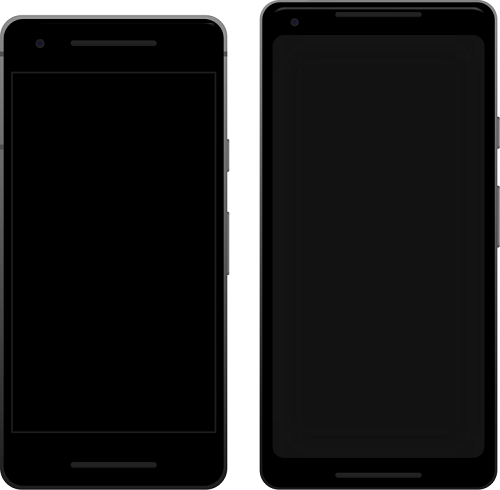 Google’s latest flagship phones are here and it’s clear that the Pixel 2 and Pixel 2 XL are more refined and powerful than their predecessors. No wonder Google Nexus line of smartphones are considered mainstream gadgets now and it’s clear from the generic design that Google took the Nexus line to a whole new level. Both the phones feature an aluminum unibody design covered in a hybrid coating, which keep them a little on the premium side. One simple look at the phones and one could easily point out the design difference on the front of the Pixels. While the back of both the Pixels are made from aluminum, there’s something about each of them which make them special.

What is Google Pixel 2?

Google refined its Pixel line with the all new Pixel 2 which is a significant upgrade over its predecessor and more powerful. The name Pixel itself suggests that it’s the best smartphone camera in its segment, at least that’s what Google claims. Not only that, it also has dual front-facing speakers for an immersive sound experience and best in class photos. Plus, it’s faster, water-resistant, and brings a new way to wake your own voice assistant; simply squeeze the sides of the phone to launch the AI. The back is made from aluminum with a thick hybrid coating which puts the phone on the premium side. On the hardware side, the device is powered by Snapdragon 835 processor, with 4 GB DDR4 RAM. It comes in 64 and 128 GB storage options.

What is Google Pixel 2 XL?

Then there’s the bigger Pixel; it’s actually bigger with a massive 6-inch P-OLED display. It sports a pixel density of 538 ppi with a 18:9 aspect ratio which is the real deal breaker. It’s an impressive smartphone with an equally impressive camera. Bigger phone means bigger battery. It has a 3,520mAh battery under the hood which is great for anyone who would want a phone that runs more than a standard day. It is also powered by Snapdragon 835 processor with 4 GB RAM and coupled with the Adreno 540 GPU, which is enough to keep it flying. Performance is top notch and multitasking is a breeze, thanks to the Android Oreo update which keeps the device up to date.

Difference between Pixel 2 and Pixel 2 XL

Bo the devices are powered by Qualcomm Snapdragon 835 processor, coupled with 4 GB of RAM and Adreno 540 GPU. Google upgraded the base storage option from 32 to 64 GB, plus there’s also a 128 GB option available. Both the Pixels have a 12.2 megapixel rear camera and 8 megapixel front-facing camera. Both are capable of recording 2160p videos at 30 fps, 1080p videos at 120 fps, and 720p videos at 240 fps.

Design of Pixel 2 and Pixel 2 XL

The front-facing stereo speakers on both the Pixels make them nearly identical but there’s a significant difference in terms of design. While both the Pixels are clearly taller than your average smartphones, the big bezels on the Pixel 2 makes it look a little chunky compared to the Pixel 2 XL.

Display of Pixel 2 and Pixel 2 XL

Both the phones come with very different displays. The Pixel 2 sports a 5-inch AMOLED display which looks good but not exceptional, considering the bezels at the top and the bottom make it look a little chunky. The Pixel 2 XL, on the other hand, boasts a 6-inch P-OLED display with 18:9 aspect ratio which is the actual deal breaker.

While the Pixel 2 boasts a screen resolution of 1920×1080 with around 441 ppi, the Pixel 2 XL has a spectacular 18:9 display (2880×1440) with a pixel density of 538 ppi. The rounded corners of the XL make it easy to hold and it feels like nothing but display. The 6-inch may not be a deal breaker, but the aspect ratio surely is. The video makes use of the whole screen for a wonderful cinematic experience.

Colors of Pixel 2 and Pixel 2 XL

Battery of Pixel 2 and Pixel 2 XL

The 2700mAh battery in the Pixel 2 packs enough juice to get you at least 24 hours of mix usage give and take, which is enough to wrap things up. The Pixel 2 XL, on the other hand, packs a larger 3520mAh battery which is more than enough for those who need a phone that lasts more than a regular day with mix usage. However, both the Pixels have an 18W USB-C PD charger in the box.

Summary of Pixel 2 and Pixel 2 XL

Google’s Pixel phones are definitely aimed at all kinds of Android users, considering the flagships boast some key features that make each of them special. It doesn’t take much to identify the difference between the two in terms of design. The big bezels on the top and bottom of the smaller Pixel makes it a little chunky compared to the bigger Pixel. While the Pixel 2 sports a regular 5-inch AMOLED display with a pixel density of 441 ppi, the Pixel 2 XL sports a massive 6-inch P-OLED display with 538 ppi. And the best thing about the Pixel 2 XL; it boasts a full-screen aspect ratio of 18:9 which makes for a wonderful cinematic experience.

Outside his professional life, Sagar loves to connect with people from different cultures and origin. You can say he is curious by nature. He believes everyone is a learning experience and it brings a certain excitement, kind of a curiosity to keep going. It may feel silly at first, but it loosens you up after a while and makes it easier for you to start conversations with total strangers – that’s what he said."
Latest posts by Sagar Khillar (see all)
Share Tweet Pin Mail
Categories: Gadgets, SmartPhones
Tags: google, Google Pixel 2, Google Pixel 2 XL, Pixel 2, Pixel 2 XL
previous post Difference Between Flash drive and Pen drive
next post Difference Between Political Parties and Interest Groups