Difference between bolus and chyme 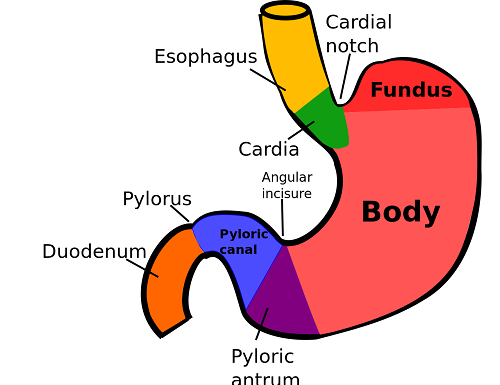 All living organisms need nutrients to survive. While plants can obtain their nutrients through processes that occur via the roots, animals require the consumption of nutrients via physical and chemical means. Consumed food consists of protein, fat and complex carbohydrates which must be converted into simple molecules via a multistep process of digestion and adsorption. During digestion, food particles are broken down to smaller components which are later absorbed by the body. This break down happens via physical means such as chewing and chemical means such as enzyme-catalysed reactions [3].

The human digestive system is responsible for food ingestion, digestion, absorption of digested food molecules as well as the elimination of undigested ones. The digestive system itself consists of a long tube known as the gastrointestinal tract and several accessory organs such as the teeth, salivary glands, liver, gall bladder and pancreas that are all involved in the breakdown of ingested food particles [1]. The digestive tract provides the pathway through which food moves through the body. Digestion begins in the mouth as enzymes in the saliva start to break down food particles. During this process, food is broken down into smaller pieces making adsorption possible.

Bolus is defined as a ball-like mixture of food and saliva that forms in the mouth during the chewing process. It usually has a similar colour to that of the food being eaten with an alkaline pH due to the saliva it is mixed with. Chewing helps to break down food into particles that can be easily swallowed. Saliva adds digestive enzymes, water and mucus that help to chemically break down food particles while simultaneously hydrating and lubricating them for taste and to aid the swallowing process [2]. The terminology bolus itself refers to the mixture of food and related mixtures until they are passed into the stomach. Once the bolus reaches the stomach and mixes with gastric juices, it reduces further in size and becomes known as chyme [3].

Chyme is defined as a semi-fluid substance that is formed in the stomach. It is made of partially digested food, water, hydrochloric acid and various digestive enzymes. It is initially acidic in pH but also contains salivary and gastric enzymes and passes from the stomach to the small intestine in short batches [5].

Chyme is composed of food particles, water, salivary enzymes, gastric enzymes and partially digested carbohydrates and proteins. It also contains cells from the mouth and oesophagus that may have been removed during the chewing and swallowing process. The overall time which chyme will remain in the stomach as well as the relative amounts of fats, carbohydrates and so on will vary with the type of food that was eaten. For example, an ingested piece of food that was rich in fats and proteins will result in the production of chyme that is oily and frothy while ingestion of carbohydrate-rich foods that were not properly chewed will result in chyme containing chunks of unprocessed food that will remain in the stomach for longer periods of time. In addition, other conditions like hormonal imbalances, alcohol and tobacco consumption and chronic stress may also in turn affect the composition of chyme [4]. It is also important that chyme is not confused with chyle which forms when fats begin to be digested in the small intestine.

How is bolus formed?

The chemical process of digestion begins during chewing. Food is mixed with saliva produced by the salivary glands. This saliva moistens and buffers the pH of the food being eaten. Saliva also contains an array of enzymes such as lysozymes, amylases and lipases [6]. Lysozymes have an antibacterial function while amylases aid the conversion of starches into maltose disaccharides. Lipases on the other hand aid in breaking down fats. Together this chewing and moistening action by the teeth and salivary enzymes converts food into a mass called the bolus which is easier to swallow. The tongue aids in the movement of the bolus from the mouth into the pharynx.

How is chyme formed?

The bolus passes through the oesophagus after being swallowed and broken down in the mouth. Peristalsis of the oesophageal muscles occur which aids in pushing the food towards the stomach [3]. When food particles enter the stomach, the cardiac sphincter closes and the broken down food particles will stay in the stomach for about 3 – 4 hours [2]. A large portion of protein digestion within the bolus occurs in the stomach. The pepsin enzyme together with the acidic environment in the stomach results in further breakdown of proteins. Contraction and relaxation of the stomach muscles leads to a churning action which further aids chemical digestion in the stomach. The partially digested bolus together with gastric juices is now referred to as chyme. This chyme then passes into the small intestine but only a small amount can pass through each time. Here digestion of proteins, fats and carbohydrates is completed and absorption of nutrients occurs [3].

Conversion of bolus into chyme within the digestive tract

Generally bolus is swallowed and travels down the oesophagus to the stomach for digestion. Once the bolus reaches the stomach, it mixes with gastric juices and becomes chyme. The chyme then travels though the intestines and moves on for further digestion and absorption. Undigested portions are eventually discharged as faeces.

Digestion begins in the mouth as enzymes in the saliva start to break down food particles. As food is chewed, it becomes lubricated with saliva, making it warmer and easier to swallow and digest. The teeth form an important part of the digestive tract as they work together with the mouth to break down the food and convert each bite into a bolus. After the bolus is swallowed, it enters into the oesophagus where it moves towards the stomach [6]. The acidic environment of the stomach together with the gastric enzymes results in conversion of the bolus into chyme. This chyme forms a liquefied mass that passes from the stomach into the small intestine.

The small intestine forms the main site for digestion and absorption of proteins, fats and carbohydrates. Enzymes and secretions from the pancreas, liver and gallbladder combine to break down nutrients so that they can be absorbed into the bloodstream. The small intestine forms a highly folded surface with small finger-like projections known as villi. The surface of the villi contains microscopic projections known as microvilli which further increase the surface area for absorption of nutrients.

The nutrients pass through the intestinal membranes into the circulatory system, which transports them into the body tissues. Nutrients are then absorbed into the cells, where they are used for growth, repair, and the release or storage of energy. The chyme is further mixed with pancreatic juices. These juices further neutralize the acidity of the chyme from the stomach.

Any undigested chyme moves from the small intestine to the colon in the large intestine. Here more water and mineral salts are extracted causing the remaining undigested material to become more concentrated before being excreted as faeces.

When food is first ingested in the mouth, it is in the form of large pieces that may have originally been bitten or broken off. These pieces have a very small surface area which means the available area for enzymes to act on is also small. Bolus is formed through simple mechanical and chemical processes in the mouth. The mastication of food chunks by the biting action of teeth followed by subsequent churning actions of the tongue and cheek muscles result in the breakdown of food to aid subsequent digestive processes.

One of the main functions of chyme is to increase the surface area of food. This increased surface area will aid the processes carried out by the digestive enzymes. These enzymes can now reach and act on a range of new surfaces on the food particles thereby increasing the rate of digestion. In addition, chyme also stimulates the digestive glands to release more enzymes which in turn aid further digestion [4].

Major differences between bolus and chyme