Difference Between Bedbug and Tick 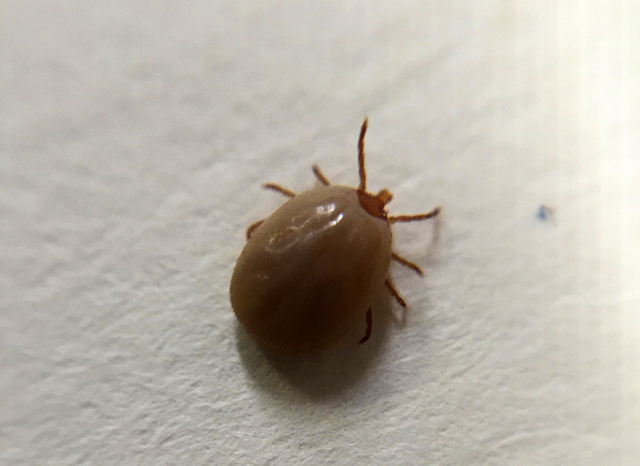 What is a Bedbug?

A bedbug is a brown, flat and oval-shaped blood-sucking parasite; it is mostly likened to an apple seed. They belong to a specific family of insect known as Cimicidae. There are several species of bedbugs; however, Cimex lectularius and Cimex hemipterus, are the most common species that infest humans.

Bedbugs live on the cracks of beds, bed frames and headboards. They live on the bedside because they usually feed on humans when they are asleep. Their bites are painless hence the attacked person notices the attack way later. The bitten skin turns red and has a darker spot in the middle. They are known to bite the neck, hands, arms and face of a human. In some people, the bites cause allergic reactions, for instance, severe itching. Bedbugs do not, however, transmit or spread any human diseases. Bedbugs are tough to get rid of since their population grows fast. It is therefore advisable to invest in a professional pest controller once you detect their presence.

What Is a Tick?

A tick is a tiny and wingless parasite. It belongs to the Arachnid class. There are various types of ticks for instance cattle tick, American deer tick and sheep tick. There are three families that ticks can be classified into:

Ticks mostly thrive in areas that are warm and humid. For metamorphosis to take place, they need air that is moisturized at a certain percentage. Ticks stay at the end of leaves of both plants and shrubs as they wait for their hosts. Once the hosts come to feed, the ticks drop on them.

The tick bites cause bumps and itching on the host due to the anticoagulant. Since ticks cannot jump or fly they usually crawl around. Using their legs, they can detect changes in the host’s skin using a sensory organ called Haller’s organ.

Ticks are dangerous because they quickly spread diseases to the host since they feed on multiple hosts during their lifecycle.

Differences Between a Bedbug and a Tick

Bedbugs feed on human only while the tick feeds on both human and animals.

Bedbugs are found in the indoor environment, on the other hand, ticks live outdoors.

Bedbugs only cause bumps and itches without spreading any disease. Ticks feed on different hosts hence spread infections like tularemia and Lyme disease.

Bedbugs are insects they, therefore, have six legs. On the other hand, ticks are arachnids like the spiders and therefore have eight legs.

To prevent bedbugs, you need to be cautious when unpacking before, after and during a trip. You also need to check for bedbugs in used furniture and clothing before taking them home. For tick infestation prevention you need to avoid going to tick-infested areas. Wear protective clothing if you must go to the infested areas.

Ticks only feed on a host and then drop till next metamorphosis while bedbugs feed on the human every night.

Bedbugs are tough to get rid of because they hide in dark areas that are hard to see and they attack you at night. Ticks, however, can be seen crawling on you making it easier to eliminate them. You also got an option of wearing protective clothing when visiting infested areas.

Bedbugs are clever creatures they know that you can pick them off, they therefore only feed for a few minutes and get back to their hiding areas. Ticks, however, can feed for days on the host before dropping from them. 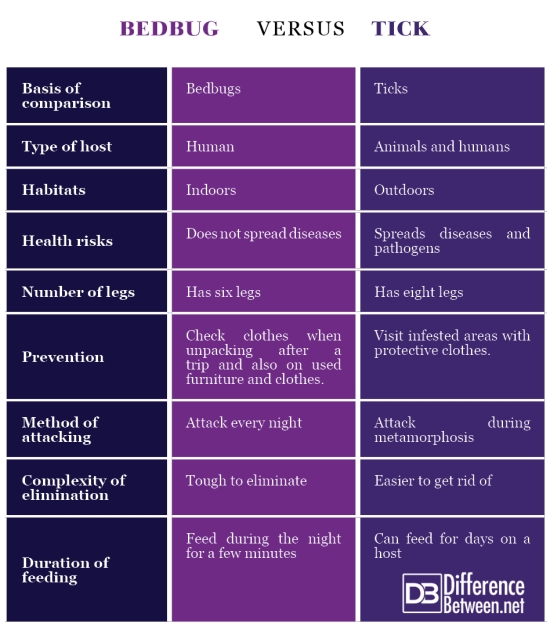 Summary of Bedbug vs. Tick