Difference Between Plan B and Take Action 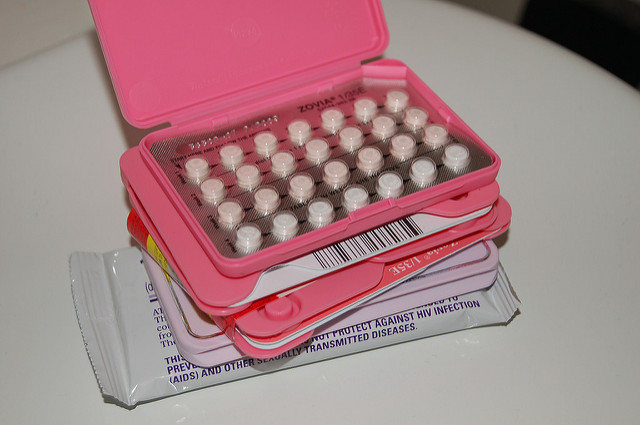 For over thousands of years, humans have used all sorts of agents, both natural and artificial, to cure their illnesses, promote their well-being, and control their fertility. The terms like contraceptive and fertility control, or birth control, have been around since ages. Birth control is well documented in Mesopotamia and Ancient Egypt. The records detailing the use of birth control in Egypt date all the way back to 1850 BCE. Ancient Egyptian women used to rub crocodile dung on their cervix to prevent pregnancy. Thanks to the advancements in the medical field, artificial forms of birth control are now a common part of modern society.

Barrier methods such as condoms and diaphragms, also known as womb veils, became popular over the years. Hormonal methods such as IUD and contraceptive pills were indeed revolutionary. Today millions of women all over the globe take birth control pills to prevent pregnancy. In fact, almost 10 percent of women must have taken birth control pills at some point during their lifetimes. And millions are currently taking the pills almost every day. Birth control pills cause parts of the brain to stop producing sex hormones which in turn stops the release of an egg from the ovaries. Plan B and Take Action are the two most common emergency contraceptive pills women use after having unprotected sex. 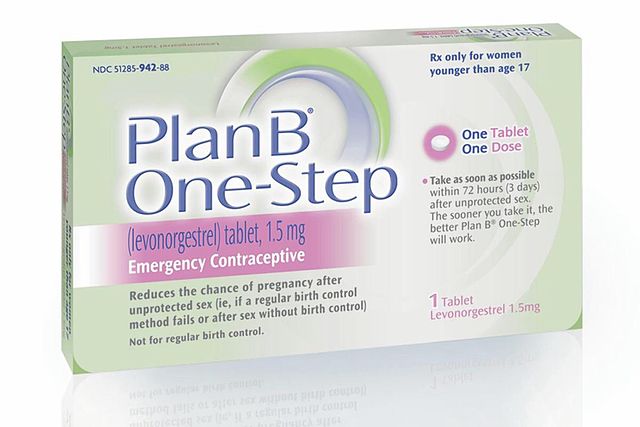 What is Plan B?

Levonorgestrel or Plan B is an emergency contraceptive pill, commonly called the morning after pill that contains medication which is used as a backup contraception to reduce the risk of pregnancy when taken within 72 hours after unprotected sex. At times it can be more effective the sooner you take the pill. However, it does not protect against any kind of sexually transmitted diseases. It only prevents ovulation, if you haven’t already. It has a high-dosage progestin-only formulation that has fewer side effects than other emergency contraceptives. The pill stops the release of an egg from the ovary and it may prevent the sperm from fertilizing the egg.

What is Take Action?

Take Action is a generic form of Plan B One-Step that consists of a single pill which helps prevent pregnancy. It is a progestin-only emergency contraceptive which contains a higher dosage of levonorgestrel than other birth control pills. It is a backup method to prevent pregnancy which means it can only be used in emergency and not as regular contraception. It is the most widely used ECP in the United States. The package inserts calls for taking the pill within 72 hours of unprotected sex. However, it can still be effective when started up to 5 days after intercourse. It reduces the risk of pregnancy considerably and the success is indicated by onset of menstrual bleeding in about 21 days.

Difference Between Plan B and Take Action

Although both Plan B and Take Action are emergency contraceptive pills commonly used to reduce the risk of pregnancy when taken within 72 hours after unprotected sex, Take Action contains a higher dosage of levonorgestrel – a progestin found in many combinations OCs – than other birth control pills such as Plan B. Take Action is a generic form of Plan B One-Step which is a little hard to get. Plan B are the easiest to get because you don’t need a prescription and almost anybody can buy them over the counter at any drugstore. Regardless, both are used specifically for emergency contraception.

While both are used as emergency contraceptives, they will not terminate an existing pregnancy and will not harm a fetus if present. This means if you are already pregnant and still take the pills, it will not cause a medical abortion. While some side effects are common in both such as vomiting and nausea, each can have adverse side effects of their own. The major side effects of Take Action are heavier menstrual bleeding, abdominal pain, breast tenderness, fatigue, dizziness, and headache. The side effects of Plan B are unexpected bleeding and diarrhea, which is quite rare. 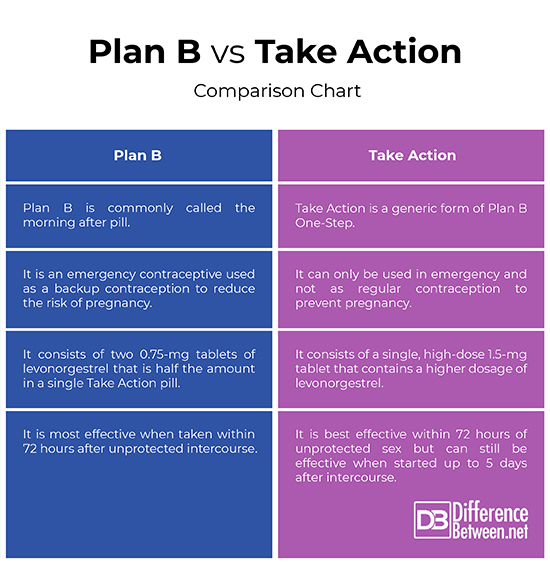 Summary of Plan B Vs. Take Action

Both Plan B and Take Action are morning after pills used as emergency contraceptives by women to prevent pregnancy following unprotected intercourse, which can result from contraception failure such as broken condom, sexual assault, and so on. Both the pills are safe and effective and are marketed specifically for emergency contraception. They are the commonly used ECP which reduces the odds of pregnancy when taken within 72 hours of unprotected intercourse. Take Action, however, consists of a single, high-dose (1.5-mg) tablet of levonorgestrel, which is double the amount in two Plan B pills. Adverse side effects are almost similar in both Plan B and Take Action.

Outside his professional life, Sagar loves to connect with people from different cultures and origin. You can say he is curious by nature. He believes everyone is a learning experience and it brings a certain excitement, kind of a curiosity to keep going. It may feel silly at first, but it loosens you up after a while and makes it easier for you to start conversations with total strangers – that’s what he said."
Latest posts by Sagar Khillar (see all)
Share Tweet Pin Mail
Categories: Drugs, Health
Tags: Plan B, Take Action
previous post Difference Between Fellowship and Internship
next post Difference Between Polarized and Non-Polarized Lens