Difference between xylose and glucose 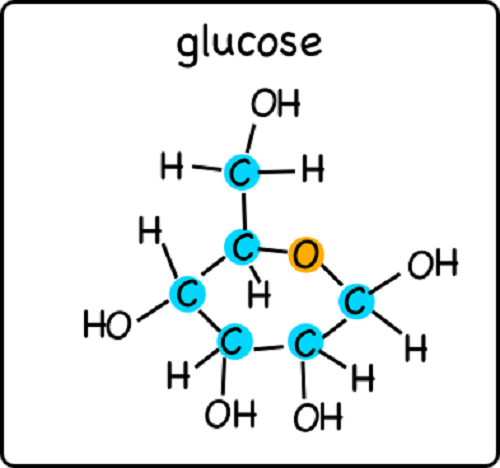 Sugar plays an extremely important role in any diet and understanding this role is essential for maintaining optimal health. While sugars that occur in their natural source like fruits and vegetables are acceptable for healthy consumption, those that have been removed, processed and added to foods are a little less healthy [1]. Keeping our sugar intake to a minimum or rather healthy level is essential in any diet in order to decrease the risk against diabetes, heart disease and preventing weight gain. Glucose is one of the most common organic forms of sugar found in nature and serves as the primary source of energy for many living organisms [2]. It is commonly processed and used in the baking industry. Xylose on the other hand is a natural sugar found in woody materials such as birch bark. It’s commonly consumed derivate, xylitol is a crystalline aldose sugar that is used as a sweetener for teas and coffees [3].

Where is glucose found?

Glucose is the main molecules that serve as an energy source for plants and animals. It is found in the sap of plants and in the bloodstream of humans and is commonly referred to as blood sugar [2]. Almost all carbohydrate containing foods have some form of glucose and these may include fruits, bread, potatoes, and legumes and so on [4].

Glucose is a carbohydrate which means it is composed of the elements carbon, hydrogen and oxygen [1]. It is known as the most important simple sugar in human metabolism. While it is more commonly known as a simple sugar it is also known as a monosaccharide and sometimes also referred to as dextrose. Glucose forms a six carbon hexose sugar that contains an aldehyde group on first carbon. Each of the other five carbons bears one hydroxyl group [5]. Glucose has a chemical formula of C6H12O6 and can adopt several structures such as D-glucose (or dextrorotary form) and L-glucose (of laevorotary form).

The normal concentration of glucose in the blood is about 0.1% but it may become higher in individuals suffering from diabetes. When glucose is oxidized in the body, it forms products of carbon dioxide, water and nitrogen. It also results in energy production of about 2870 kilojoules per mole which is subsequently used by the cells [2].

Glucose has a range of applications in various fields. In hypoglycaemia management for example, individuals with diabetes may carry around small amounts of sugar, often in the form of glucose tablets or candy. Glucose is also widely used in the food and beverage industry [6]. Most commonly, liquid glucose is used in a range of industries such as food production, pharmaceutical, agricultural and even in the animal feeds industry. It is widely used as a nutritional supplement and sweetener in food production and in infant formulas to improve their nutritional value. More commonly it is uses in the confectionary industry to provide a sweet taste and enhance yeast growth during baking.

Glucose has a range of benefits but these can be summarised into three main uses. The first has to do with hypoglycaemia or more simply put; a deficiency of glucose in the blood. While the body requires a great deal of things to survive one of the biggest requirements is glucose. The brain cannot function without glucose and low blood glucose levels can lead to weakness, dizziness, anxiety, severe confusion, convulsions and even a coma [2]. Adequately maintaining glucose levels in the bloodstream is imperative for optimal body health. The second main use of glucose is to help athletes recover and plants photosynthesise. Many athletes use glucose pills to boost their recovery both during and after a workout. The glucose intake provides electrolytes that in turn help athletes to perform better. Plants on the other hand obtain their food through a well-known process called photosynthesis. During this process, glucose is formed as a means of energy creation to help plants survive. The last major use of glucose is as an ingredient in many types of food, sweets and drinks. 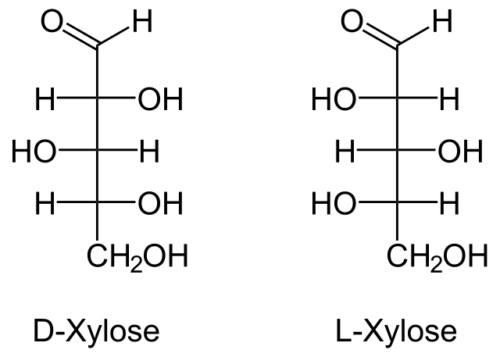 Where is xylose found?

Xylose was first isolated in woods such as birch and is now commonly found in a range of woody materials such as straw, pecan shells and corncobs. It is also found in berries, spinach and broccoli. The body is known to produce some xylose on its own but this amount is very small [7].

While xylose is generally known as wood sugar, it is defined as being an aldo-pentose sugar which essentially is a monosaccharide containing five carbon atoms and an aldehyde functional group. It has a chemical formula of HOCH2(CH(OH))3CHO and can adopt several structures but this will depend on the surrounding conditions. These structures include D-xylose (or dextrorotary form) which occurs endogenously in living things for example and L-xylose (of laevorotary form) which is synthesized.

The derivate of xylose is xylitol which is commonly consumed as a sugar substitute. When xylitol is consumed, the body cannot utilize it and so it moves through the GI tract without being completely metabolized [8].

After a great deal of research, xylose has since been regarded as being safe to use as a sugar substitute. Xylitol is often found in many products that fight tooth decay such as toothpastes, mouth wash and even sugar free gum. Recent studies have also shown xylitol to improve some of the existing decay and even aid dental health as it reduces the ability of the bacteria to stick to teeth. Xylitol has no carbohydrates which means it can be used in many diet based foods. In addition, it also has a high fibre content which further reduces the number of calories and aids weight loss and digestive health in individuals [7]. Due to the increase in type 2 diabetes an alternative sugar source is needed. While white sugar may raise insulin levels in the body, when xylitol on the other hand is introduced into the body it does not raise insulin levels thereby serving as an excellent alternative.

Xylose is an antibacterial and antifungal that contains many healing properties. Physicians recommend xylitol as a substance for sugar due to its increased health benefits. Due to the fact that it has no carbohydrates and much higher fibre content, it is also known to aid weight loss and digestive health.  Xylitol is also known to lower insulin levels and can restore hormonal balances and reduce symptoms of premenstrual tension. Studies have also shown it to play an active role in preventing cancer of the digestive tract.

According to the American Heart Association (AHA), the maximum amount of added sugar that should be eaten in a day is approximately 25 g while xylose forms a much safer option for consumption and has no severe side effects. Xylose is recommended in daily allowances of up to 35 grams in two separate doses.

Differences between glucose and xylose