Difference Between Dew and Fog 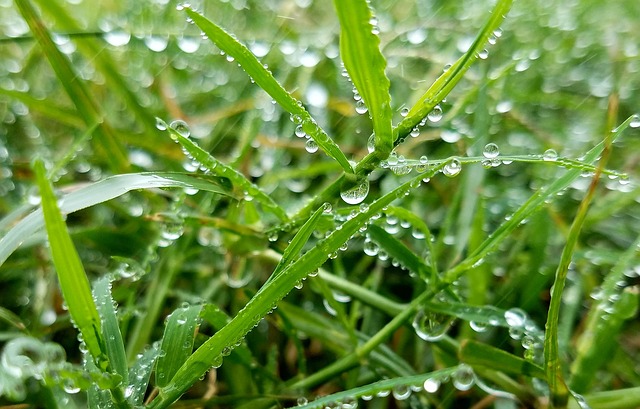 Fog and dew are closely related atmospheric conditions often causing confusions in describing or seeing them. There is significant difference in the formation, composition and appearance of fog and dew. Other closely related terms to fog and dew include mist and frost.

In a nutshell, mist is a thinner version of fog formed under certain conditions, and frost occurs after dew when temperatures have dropped below the freezing point. In this article the difference between fog and dew are examined. 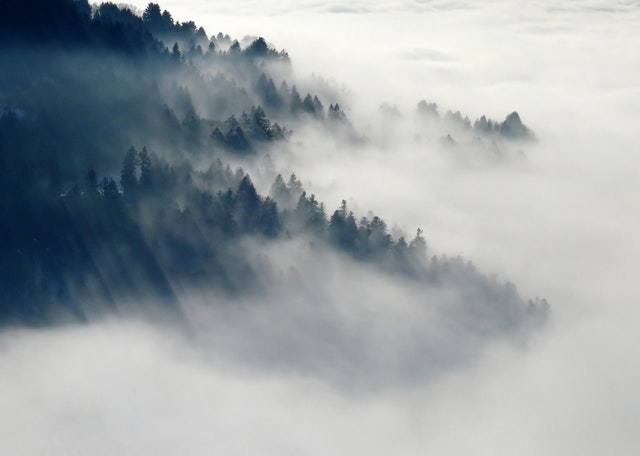 Fog is an atmospheric condition characterized by the cloud appearing close or at the earth’s surface. It is a thick cloud that can reduce visibility greatly. It is hard for motorists during fog because they struggle to see even in the presence of vehicle lights. Strong winds and the sun can make the frog disappear gradually and clear the way.

Fog normally forms at night when air cools to a point where condensation is reached. The formation of fog may be affected by the slopes. In flat surfaces, for instance, air cools evenly and condensation forms under light wind speeds so fog eventually forms. In sloppy areas, the wind speeds increases while wind flows down the sloppy areas. This prevents fog formation.

Fog is not necessarily consistent in thickness. In other areas it may appear thinner or even have some patches. It is predominant in areas near the streams and in valleys. Mist, in contrast, is prevalent in mountains. In winter months, fog is most common and may last the entire day.

Clear skies lead to a quick formation of fog because they cool air quicker than the cloudy skies. Basically, fog and dew are formed the same way by the cooling of air temperature to dew point. The wind speed as the effect to determine that which conditions is the remainder. Calm winds lead to dew formation whereas light wind speeds lead to fog formation. The definition of dew is highlighted below.

Dew, on the other hand, is the condensation that occurs due to temperature drops to the dew point. It often appears on grass, twigs, leaves, and metal surfaces as fine water droplets. Despite being composed of fine water droplets, dew can be measured using the dew gauge.

Unlike fog, dew does not affect visibility. Like fog, it also forms at night when moisture condenses to the earth’s surface. The temperature above the ground is cooler than the air at ground level. Radiation cooling causes the air at the surface to eventually cool to a point of condensation. As a result, water drops will appear on objects on the surface with grass and leaves being the common targets. When the air above the ground cools, then fog formation comes into place.

If the temperature drops further, dew freezes and leads to frost formation. This is characterized by ice crystals often observed in the mornings. Rapid conversion of water vapor to ice also cause frost. That is the process termed sublimation.

Key differences between fog and dew

Definitions of Fog and Dew

Fog is a thick cloud that appears very close or at the earth’s surface. However, its thickness may not be consistent throughout the surface. There could be some patches.

Dew, on the other side, is the condensation that forms on the earth’s surface, often visible on twigs, leaves, grass and metal surfaces.

Formation of of Fog and Dew

Calm winds lead to the formation of dew. The surface of air at ground level is colder than the air above the surface. Radiation cooling lead to the temperature drops to the condensation level and then dew forms. When the air above the ground cools under light wind speeds, fog also forms. All these atmospheric conditions normally form at night and are therefore visible in the mornings.

Occurrence of of Fog and Dew

Fog and dew normally occurs at night. Cold climates also lead to their formation. Fog is rare in sloppy areas due to unstable cool winds. Instead, wind flows down the hills thus preventing cooling. 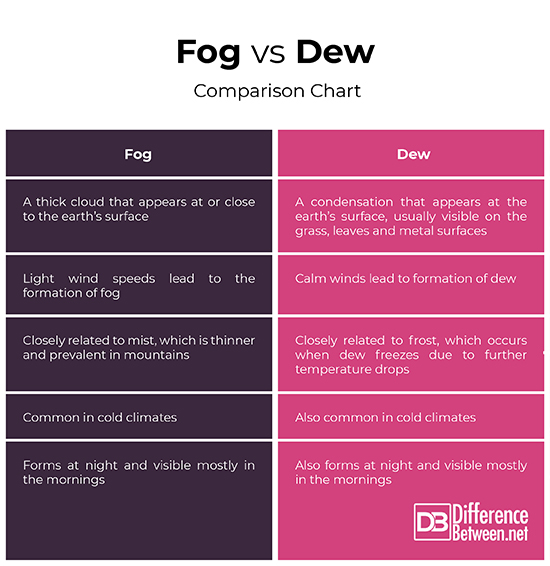 Summary of of Fog Vs. Dew