Difference Between Gnats and Fruit Flies 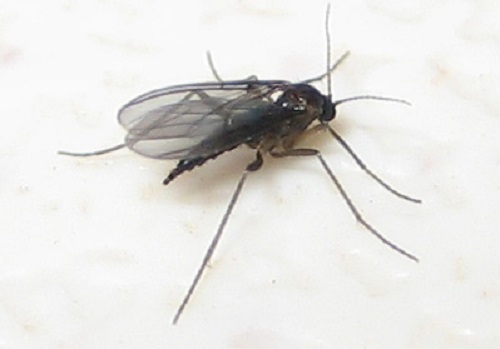 Gnats and fruit flies are both small fly species that are found in similar habitats. They are often confused for one another as it is not very easy to tell them apart.  However, there are differences between the two. One thing that is different is their appearance. Gnats are tiny insects that are typically a glossy black color and approximately one sixteenth of an inch long. They also have long gangly legs that are noticeable when flying[i], and they have segmented antennae that is longer than their heads and translucent wings.[ii] In contrast, fruit flies are typically a beige or brown-orange color with bright red eyes and grow to be approximately one eighth of an inch long. They also have black tails. Despite these physical differences, it may sometimes still be necessary to observe them under a microscope to truly tell which one you might be looking at.[iii]

Fruit flies and gnats both belong to the insect order Diptera, considered the true flies. However, they belong to very distinct families within that order. Common fruit flies fall under two families, Tephritidae and Drosophila. The larger and more colorful types are found in the Tephritidae family and the smaller ones belong to Drosophilidae.[iv] Gnats are found in the suborder Nematocera and are typically in the families Mycetophilidae, Anisopodidae and Sciaridae.[v]

Fruit flies are found all over the world, but because they are fascinated with ripening fruits, they are commonly found in kitchens, restaurants and anywhere else fruit may be found. The females will lay their eggs on rotting fruits and vegetables[vi], so that their larvae may find food upon emerging. Fruit fly species can be found all over the world, including in deserts, tropical rainforests, cities, swamps and alpine zones. However, there are more species located in tropical regions than in other climate types.[vii] Gnats are mostly found in moist and damp places, such as forests, swamps and even meadows where they can live in the foliage. They are also found in flowerpots.[viii] Another place in which gnats are found is above large bodies of water. This allows them to absorb the carbon dioxide that is emitted by algae. They fly together in large flocks, commonly referred to as ‘ghosts’ since they look like a dark shadowy figure from a distance. This is another feature that is quite different from the solitary fruit fly. The female gnat will lay her eggs in soil and they will begin to consume any food source they can find.[ix]

For gnats, the life cycle of only a few species has been studied in detail, typically with those that are considered pests to the mushroom industry. For these species, the female will usually lay about 200 eggs, of which about 90% are female. The larvae will begin to emerge after about a week and they will feed on fungi, rotting organic material and animal feces. They play an important role in turning forest leaf litter into soil.[x] They will then metamorphose into pupae, a stage which lasts about another week. After this, they develop into adult gnats and have a fairly short life-span, lasting for only about another week during which time the females will mate and once again lay eggs.[xi] The life cycle of the fruit fly is commonly around 30 days, but it has been shown that their lifespan can be increased to 3 months under the right conditions. Females commonly lay approximately 400 eggs which will hatch after about 12-15 hours and the larvae take about four days to grow while feeding on microorganisms that decompose the fruit as well as the sugar content of the fruit itself. After that, the larvae they metamorphose into pupae for another four days after which time, they will once again emerge, this time as adults. Between eight and twelve hours after emerging, the females will become receptive to mating and will lay eggs beginning the cycle again.

Both the fruit fly and the gnat are considered pests when they interact with humans. There is a difference in that gnats can bite humans and fruit flies cannot. However this is only a general rule and may not apply to all species. But even with their ability to bite, gnats, like fruit flies, are of no harm to humans. Their status as pests is one area in which the fruit fly and gnat do have many similarities. They both seem to respond to the same methods for preventing or ridding oneself of an infestation. Common methods that work well on both species include: creating a trap by mixing apple cider vinegar with a few drops of dish soap, pouring leftover red wine in a jar to trap them, mashing up banana slices in a jar and covering the top with plastic wrap, pouring a bleach solution down the bathroom sink, using an insect fogging produce or placing rotten fruits into a jar to trap them. It is also a good idea to prevent an infestation of either by cleaning dirty dishes, covering and changing the trash bags often, drying any damp areas in the house and changing potting soil which may have served as a place for the female gnat to lay her eggs.[xii]