Difference Between Pelican And Stork 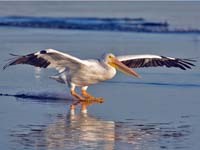 Pelicans and Storks are two elegant migratory birds that can fly high up to longer distances. They are large bodied and endangered species. Both of them don’t sing at all, and people have weaved fascinating myths around them through the centuries, though such legends are attributions to their nature of living. Whatever it is, pelicans belonging to the Order of Pelicaniformes, and the Storks to Ciconiiformes, have noticeable differences that attract our attention.

Pelicans are large water birds in the genus: Pelecanus. There are eight species of pelicans and most of them are found in the coastal regions, including the coasts of the Pacific and Atlantic Oceans. Some species live inland through the breeding season, while others continue on the coasts. Five species are white pelicans which are seen around fresh waters. The brown pelicans have their habitats in the sea.

Pelicans have the largest bill, with a hook curved downwards on the edge of the upper bill, and a pouch attached to the lower. They don’t sing, but only croak and grunt. The Brown pelican’s wing stretches to 1.8 metres, while that of the Dalmatian is 3 metres. Pelicans have short, but strong legs, and feet with webbed toes right for swimming. The Australian, Dalmatian, Great White, and American White pelicans make their nests on the ground, whereas, the Pink-backed, Spot-billed, Brown, and Peruvian build their nest in trees.

Pelicans feed on fish they catch from coastal or inland waters. They are sociable and prefer to move in groups. Adult pelicans exhibit visual displays for communicating with each other using their wings and bills. The adults breed in colonies where they grunt, but on leaving the colony they keep silent. After laying eggs, the adults keep standing on them to incubate. The pelicans leave their mates after each breeding season. 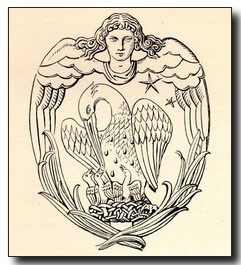 Pelicans are a symbol of empathy, nobility and goodness. The given symbolic depiction of a mother pelican feeding the little ones denotes a legend originated prior to Christianity. According to the legend, the mother pelican, to save her babies from starving, wounded herself with the beak to feed them her blood. It is apt to remember here, the lines of Shakespeare (1616) in Hamlet, “To his good friend thus wide, I’ll open my arms / And, like the kind, life-rendering pelican / Repast them with my blood.”

Storks are large wading birds belonging to the genus: Ciconia. They are long-legged with elongated necks. There are 19 species of storks in the world, and the main species are called Black-necked, Painted, Openbills, Woolly-necked, and Marabou storks. They are migratory, and are seen in the dry and wet habitats in Africa, Asia, and Europe. They fly for long distances with the help of their strong, long and broad wings. While flying, the storks flap their wings and soar alternately, with the necks outspread and legs trailing. Storks lack Syrinx and are mute. However, they make sounds by snapping their bills. 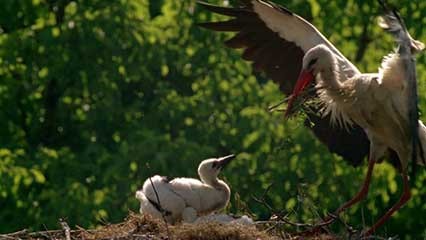 Storks have long legs and their toes are somewhat webbed. They are carnivorous and feed frogs, fish, earthworms etc., during the day. Generally, most of them are seen in flocks, but when the breeding season begins, they start to pair off. Storks build strong and large platform nests on big trees as well as on shelves like projections on the rocks. The storks make them for long term stay as they are homebound. The male stork helps the female in incubating her eggs.

The stork was considered as a good sign of luck, because when they happened to nest on roofs and chimneys of houses, the people believed that the couple living in the home would bear new children. As per certain other mythologies, storks are a symbol of fidelity and monogamy as they live with the same mate lifelong.